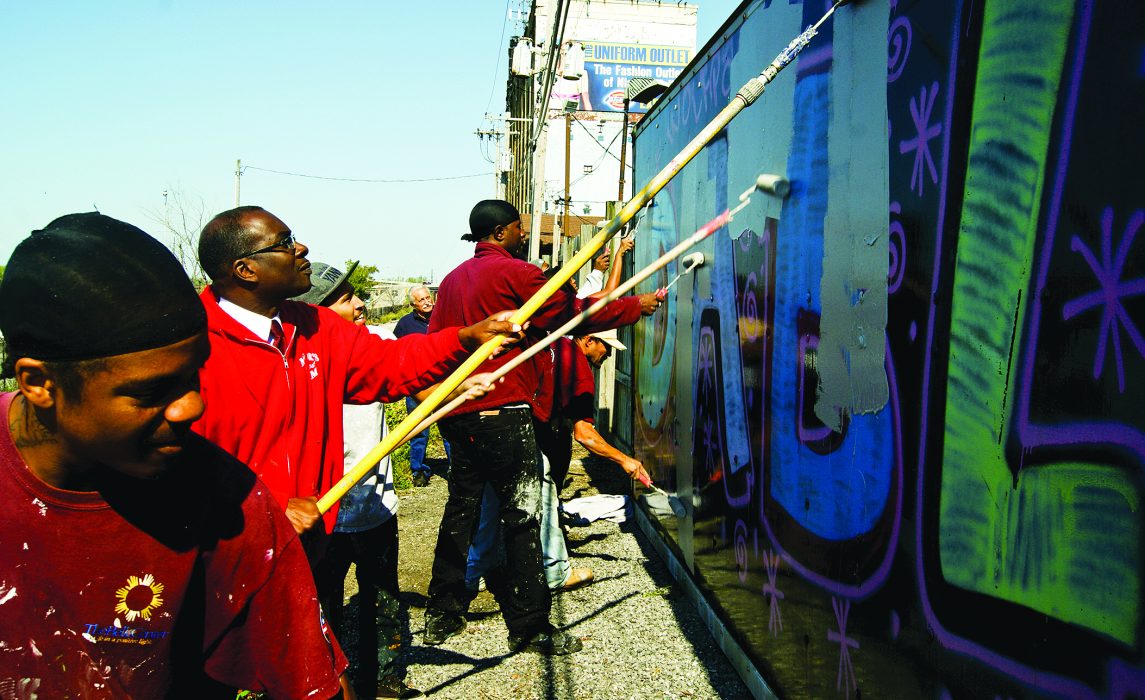 In the first of a five-part series, Fast Company profiles Cities of Service and introduces our new Engaged Cities Award, launching on November 7, 2017.

A Call to Turn Residents into Partners

With the Engaged Cities Award, Cities of Service looks to recognize the impact of creative citizens and mayors-and to inspire more engagement.

On a sunny Sunday in February, dozens of citizens in the greater Phoenix area descend on Hu-O-Te Park, a shabby community space in downtown that has seen years of neglect. A cinderblock wall behind the playground is partially covered with graffiti. Dead and dying plants stand in a dirt patch, and litter riddles the site.

They hoe out the brown patches and plant drought-tolerant lantana. They pick up garbage from a nearby alley. Local Muralist Andy Brown leads a group of kids as they paint a colorful, Southwestern-inspired mural on the wall.

By the end of the day, the park is transformed. But this was anything but a well-meaning, one-day volunteer effort. Working with Phoenix’s mayor, Greg Stanton, and armed with a $1,000 grant, the volunteers were following a carefully orchestrated blueprint, which depended on their input. The program, called Love Your Block, was developed by Cities of Service—an independent nonprofit that supports mayors and chief executives in their efforts to engage citizens to help solve problems in their own communities. Founded in 2009 by then-New York City mayor Michael Bloomberg and 16 other mayors, Cities of Service has been so successful that 235 cities in the United States and United Kingdom, Phoenix included, now participate in the coalition.

“Mayors want better ways to engage citizens across the board,” says Jim Anderson, the acclaimed urbanist and head of government innovation programs at Bloomberg Philanthropies. “Cities of Service is responding to that incredibly pressing and interesting need that cities from all over the country and globe are expressing and that’s why Cities of Service is at such an exciting juncture.”

This week, as Americans across the country head to the polls, Cities of Service is launching one of its most empowering initiatives yet: a $100,000 award to the city that can demonstrate a project that has a direct impact on their community. Known as the Engaged Cities Award, it is open to any city from across the Americas and Europe with a population of 30,000 or more.

“We want to unearth great things happening in cities around the world,” says Myung Lee, Cities of Service’s executive director. “Whether citizens are helping gather data, think through a problem, or implement solutions, our belief is that cities are really where we can help people to take the next step.”

What civic innovations the award will turn up is anyone’s guess, but if Cities of Service’s efforts to date are any indication, the possibilities are inspiring—and more important than ever.

Civic engagement is, of course, as old as cities themselves. Ever since advancements in agriculture brought people together in permanent trading centers about 3,000 years ago, mayors and city officials have tapped into local volunteers. Cities have been growing ever since. In 2008, the world finally hit an inflection point, when a full half of us were living in cities. In the U.S. that number is even more staggering; according to the latest U.S. Census, 71.2% of Americans now live in “urbanized areas” of 50,000 people or more.

Overburdened transit systems, housing stock bursting at the seams, and homelessness—not to mention global-wide problems like climate change—are all problems that cities not only face, but contribute to. Some mayors now preside over cities more populated than historic empires. San Jose, California, has a population greater than that of ancient Rome.

No mayor, no city government, can meet these challenges without help from the citizens themselves. And mayors are realizing that in a big way.

“One of the things I hear from mayors the most is, ‘We want new and better ways to engage citizens in solving problems,’” says Anderson at Bloomberg Philanthropies. “Part of that is looking for better tools to engage citizens in solving problems. That might take the form of citizen science initiatives or collecting data that helps them see problems in new ways, or using social media as a way to reach different audiences in conversation.”

It was the Great Recession, and the need to get citizens involved in not just sustaining, but improving their cities, that inspired Bloomberg Philanthropies to launch Cities of Service. Love Your Block, one of Cities of Service’s first initiatives, saw citizen volunteers successfully improve 72 targets in various neighborhoods. That got the ball rolling, and other mayors began jumping onboard with citizen engagement. Today, Cities of Service mayors are innovating outreach programs that take civic involvement to new levels.

In Gary, Indiana, Mayor Karen Freeman-Wilson is tackling issues five blocks a time through an initiative called 5x5x5. City officials and community leaders come together once a month to identify areas in need. They then work together with additional community members to clean up vacant lots and demolish abandoned homes. The program takes its name from the number of city offices, weeks, and blocks involved.

In Mesa, Arizona, Cities of Service coalition Mayor John Giles is crowdsourcing solutions through the Imagine Mesa initiative, an online community forum. Visitors not only share their ideas when it comes to improving the city, but they also register their support for their neighbors’ ideas. A city council advisory committee reviews all the ideas, then makes recommendations for implementation.

“The social needs in Mesa have always outstripped the government resources to address them,” says Giles. “So we have a history of making up that gap with volunteerism and community organizations and Imagine Mesa is a continuation of that spirit.”

Once a plan is adopted, the potential volunteer community is right there on Imagine Mesa, which has more than 64,000 participants—an army ready to be deployed.

Other coalition cities like South Bend, Indiana, have driven groundbreaking initiatives, like the Limebike dockless bikeshare system introduced this year by Mayor Peter Buttigieg. He’s part of an emerging generation of local leaders who blend the high tech—you might have seen him hanging with Facebook founder Mark Zuckerberg on Facebook Live earlier this year—and the old school. “When it comes to social media, I try to do three things,” says Buttigieg. “First, acknowledge there’s a problem. Second, say something about what we’re doing. And third, challenge the person who’s raising the issue to help in some way.”

That simple, straightforward process not only mollifies constituents but also encourages them to become part of the solution. “If somebody’s upset about pot holes, I could say, ‘Yeah, I know that road’s in bad shape, here’s when we plan to get to it. By the way, would you help me make the case for more road funding in the state next year?’” says Buttigieg. “There’s no issue that we can’t summon people to be a part of the solution on.”

Sendin’ Out a CoS

The Cities of Service Engaged Cities Award, which will be presented in May 2018, will provide more examples of how government can effectively tap into its citizens to unleash change. Many of the nominees will no doubt come from cities that are already Cities of Service coalition members. And, Cities of Service will study and blueprint the winning programs so that other cities can replicate them.

Back in February, when the volunteers in Phoenix transformed Hu-O-Te Park, Myung Lee was right there with them, not only helping the effort but also gathering ideas. Later, she met with Mesa mayor Giles, who showed her two other programs his city had been running for more than a decade: a paint-reuse program that gave citizens free, donated exterior paint to spruce up their homes, and a tool-lending program where citizens could access more than 300 tools for revitalization projects.

“These can serve as models for other cities in our coalition, and they’re great examples of how a city is working to prevent blight and engage its citizens,” Lee later said. Cities of Service prioritizes documenting and sharing successful initiatives so other cities can recreate their success.

And that’s really the whole point of the Engaged Cities Award in the first place: In the end, everybody wins.

For more information about and to apply for the Cities of Service Engaged Cities Award, visit EngagedCitiesAward.org.