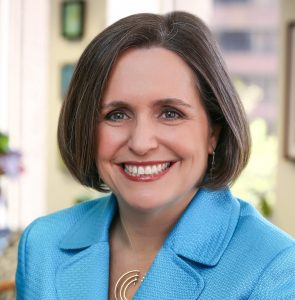 Sarah Rosen Wartell, President of the Urban Institute, is a member of the Engaged Cities Award review committee. As part of an ongoing series, we asked her a few questions about the award and her own work.

I think that the core concept of the award, which is that decision-making needs to be truly participatory with the affected communities, is the right premise. It’s very much a part of [the Urban Institute’s] mission, whether it’s research where we try to have the community participate in design, execution, and interpretation, or even social science research with the community. The idea of being able to see people who are doing it right and, in fact, getting great results, is a really exciting way of not only shaping our work, but the way we try to encourage cities to do things right.

How has engaging residents been a part of your career?

The very first internship I had as a high school senior was to work for a New York City Councilwoman named Ruth Messinger to help to build a constituency for Riverside Park, one of the city’s public parks. My first task was to organize a convening of residents and business leaders from up and down the west side of Manhattan to help them identify their vision of how that parkland should be used.

Today, my colleague Mary Bogle, who’s working with me on the Engaged Cities Award project, has been leading a project with other colleagues here working with the 11th Street Bridge Park, an arts park that is to be built in Washington, D.C.. There’s an organization that’s been working to ensure that the residents of the neighborhoods on either end are part of designing the park itself. What are the amenities? What are the social needs? How do we get employment and jobs training during the construction? etc. We are trying to to be exemplars of an engaged, participatory mode of thinking about that park.

So from my very first minutes of urban policy – I was on my way to a lab science career until I had that experience–to the work that Urban Institute is doing these days helping to plan our hometown, this mode of engagement has been something that I’ve been part of from the beginning.

How have you seen cities or other organizations engaging citizens in collecting or analyzing data and research, such as community mapping? Why is that important?

I’ll give you a particular example where we have been working to understand the safety, justice, and welfare needs of residents of multiple public housing projects. We have used methods in that work, which we do for the housing authority, that include both involving the residents of that project in the design of the research questions, and asking them to be data collectors for us because they know their neighborhoods and how to get people to share with them authentically.

Today, we understand that the lived experience of people in the community is one of the most important sources of data.

We’ve done “data walks” where we walk through a community and as we walk we reflect on some of the findings to see if it’s consistent with people’s experience. Then we get them involved in helping us interpret the data. It’s a social science research project, but it’s designed to influence the way social needs are being met in a community.

Let me give one last example. Communities around the country are beginning to wrestle with the consequences of climate change, both what kind of investments will make their physical surroundings more resilient, but also the choices they’re going to have to make about using their land differently and maybe even leaving some parts of it behind and shifting location of activities to other parts of their community that are more resilient.

Policy makers can sit in an office and do that or they can involve the residents to see what their priorities are. We are doing an increasing amount of work trying to establish the best practices for how communities should be doing this. So I’m thrilled to see this mode of work being not only rewarded, but by rewarding best practices also spreading them.

As you know, Cities of Service is working with the Urban Institute to study how our Love Your Block program increases social cohesion and social capital among participating communities. Can you talk about why it’s important for local government and organizations working with cities to collect qualitative and quantitative data?

I think that often building a shared understanding of a challenge can be accomplished by starting with some data on the table. We often talk about our work as table setting. The data doesn’t tell you what should happen next – that requires understanding the people, the resources, and the trade-offs, all of that – but the data can be very helpful in creating an understanding of goals and objectives – almost being a prism through which the question of the goal we are trying to accomplish is looked at.

To your point about qualitative data, I think the notion that data is only the facts that we find in some statistics is outdated and really outmoded. Today, we understand that the lived experience of people in the community is one of the most important sources of data and needs to be part of that table setting process.

Is there research happening now at the Urban Institute that would be interesting to people who care about helping citizens and cities collaborate to solve public problems?

Some of our most nuanced and sophisticated thinkers about engagement in designing policy responses are folks who are thinking about community justice and safety and policing policies. A big wake up call of the last decade has been the degree to which the victims of crime and insecurity are community residents, and yet they are also sometimes the victims of the policing strategies used to try to advance security. Making sure that community voices have a big role to play in determining what are our priorities for safety and how to best accomplish them will not only create better police-community relations and reduce the level of friction and, in some cases, danger that exists, but it will actually make policing more effective.