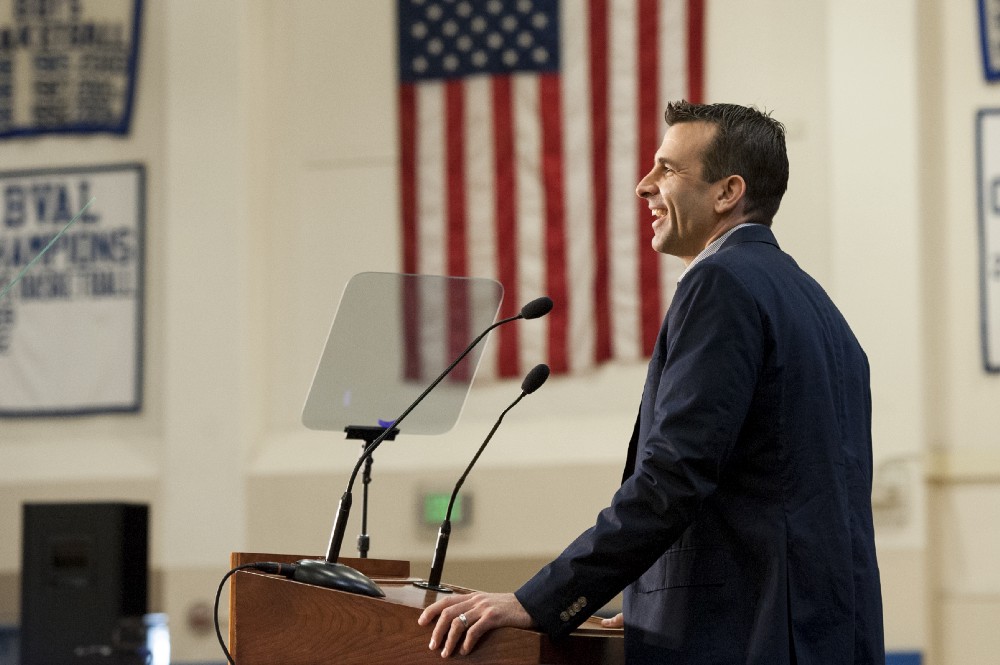 ast February, San José, California, was hit with its worst flood in centuries. After five years of drought, record-breaking rain led the nearby Anderson Dam to overflow, causing severe flooding in areas along Coyote Creek and 14,000 residents to be evacuated from their homes. Mayor Sam Liccardo asked the entire city to come to their neighbors’ aid. “Today, we’re calling on the whole community to help us,” he said at the time. San José’s residents were more than willing to lend a hand. Over the course of two weeks, 4,000 volunteers hauled more than 2,000 tons of debris from flood-ravaged homes. “To paraphrase [basketball coach] John Wooden, crises do not build character, they reveal it,” said Liccardo, whose city partners with Bloomberg Philanthropies’ What Works Cities and Cities of Service programs. “These floods revealed much about the character of San José’s resilient and giving community.” We recently caught up with Mayor Liccardo to discuss that character — and how citizen engagement and data-driven management can help empower it.

How important are engaged citizens to the success of a city?

Civic renewal is not a spectator sport — if we are to succeed, we need everyone on the field. When I took office in 2015, we launched a participatory budgeting pilot project in which we empowered residents in one city council district to directly determine how to allocate $100,000 for projects within their neighborhoods. Working with Councilmember Raul Peralez, we attracted more than 100 spending proposals from the community. A tireless group of 18 residents volunteered as budget delegates to evaluate each idea’s plausibility and cost, informing the more than 500 residents within the district who reviewed each of the proposals and voted. While the projects hardly seemed unique — street lamps, murals, art-covered utility boxes, and park improvements — many of the ideas depended on volunteer energy to build or maintain the projects, providing a “gateway drug” for greater civic engagement. As a result, we now have three council districts engaged in participatory budgeting, representing more than 300,000 residents.

Last year, I launched our Unleash Your Geek initiative, which seeks to challenge the innovators and entrepreneurs in our community to identify solutions to local problems. In our first challenge, about 140 different teams, which included local students, engineers, and tech professionals, submitted ideas for creating a device — such as a drone or robot — that could be used to remove or paint over graffiti at hard-to-access locations like freeway overpasses or railroad tresses. With small funding commitments from local foundations and companies, we’re now helping the four semifinalists to develop their prototypes, and the local U.S. Patent & Trademark Office will advise the innovators about protecting their intellectual property,

Last year, you launched “Smart City Vision” with the aim of making San José the “most innovative city in America.” What does that entail?

As Silicon Valley’s largest city, we face the challenge of enabling city hall to become as innovative as the extraordinary community we serve, embracing new management tools, cutting-edge technologies, and data to improve safety, services, and quality of life for our residents.

A deliberate strategy has focused on making our city a platform for demonstrating and beta-testing the most innovative technologies with civic impact. For example, we’ve launched pilots to expand access to broadband in low-income communities, in partnership with local school districts and with leading companies. Facebook will launch their Terragraph initiative in several downtown neighborhoods later this year, bringing free, gigabit-speed internet access to thousands of residents and small businesses on the wrong side of the digital divide.

We’re already seeing success in using data to improve services like illegal dumping abatement and park maintenance. With the help of What Works Cities, we developed an Open Data Portal and Policy that will help advance government transparency and encourage participation from civic hackers, innovators and techonologists to use big data to improve services.

We’re also deploying technology to make San José more user-friendly, including shifting more than 35 streamlined permitting processes online. This summer, we’ll launch a new smartphone app that will both make it easier for San José residents to report neighborhood blight and expedite the city’s response, and future iterations will enable resident-to-resident engagement through the app.

What are some of the biggest challenges you face as mayor? And what role does innovation play in addressing them?

Like most cities, we see many of our challenges through a lens of fiscal scarcity, lacking the financial resources to provide services to our community at the level we’d prefer. Our strategy for confronting the perennial challenge of scarcity relies on innovation — and on leveraging the energies and talent of our community.

The latter of the two strategies has led us to explore a deeper engagement with Cities of Service, an initiative that has provided the expertise and resources to scale our efforts for broader impact.

For example, the Cities of Service Bay Area Impact Program helped our neighbor-led South Bay Clean Creeks Coalition enhance and expand its efforts. With Cities of Service, the coalition now activates a network of volunteer citizens who, once a month, provide “eyes” on the creeks to not only help remove trash but also alert the city to homeless encampments or potential flooding risks. The coalition is already removing more than 40 tons of polluting trash annually from our creeks, and that pace continues to increase.

Through our Cities of Service partnership, we’re also about to launch a new program led by two AmeriCorps volunteers that will engage residents in tree-planting and other efforts to bolster our greenspace. We’ve got an ambitious citywide goal of planting 100,000 trees by 2022, and we will only get there with the engagement of hundreds of our tree-loving residents.

How important were citizen volunteers to the city’s effort after the Feb. 21 flood?

The floods left several neighborhoods devastated, with tens of millions of dollars in damage. Several thousand residents were unable to occupy their homes until the toxic residue of the flooding could be properly cleaned, and the mold abated.

Paul Pereira on my team reached out to key community leaders to coordinate volunteers for our neighborhood clean-ups with a simple goal: Do everything possible, as quickly as possible, to get families back in their homes. Utilizing online tools such as NextDoor and Facebook, and through word of mouth, we hoped to have about 100 volunteers show up for our first Saturday clean-up. We were wrong: 1,600 people showed up.

Over the course of two weeks, more than 4,000 residents responded, giving up their weekends to support their neighbors, cleaning up their homes to enable safe re-entry. Together, they hauled out more than 2,000 tons of debris and ruined materials, clearing our flood-impacted neighborhoods faster than the statewide disaster relief experts thought possible.

Now we’re channeling that same spirit to launch an initiative to “take back” the blighted corners of our city through our #BeautifySJ initiative. By launching a new anti-blight reporting app, and by engaging with thousands of residents, we will work to dramatically reduce the trash, graffiti, and blight — and restore our collective pride in San José.

What is your best advice for new mayors?

Get outside of city hall. It’s easy to get trapped into the routine of meetings and the rut of bureaucratic thinking. The most impactful initiatives I’ve led have depended on partnerships with companies, philanthropy, and non-profits in the community. We can’t get much done doing it alone, but cities — and mayors — are natural conveners of community partners. Many civic-minded people want to help if we just engage with them and provide them with a path to work with us.