Boulder Barrels: Water Brings Communities and Planners Together in Colorado

In the News
By Rosalind Becker, Resilience Project Manager, Cities of Service 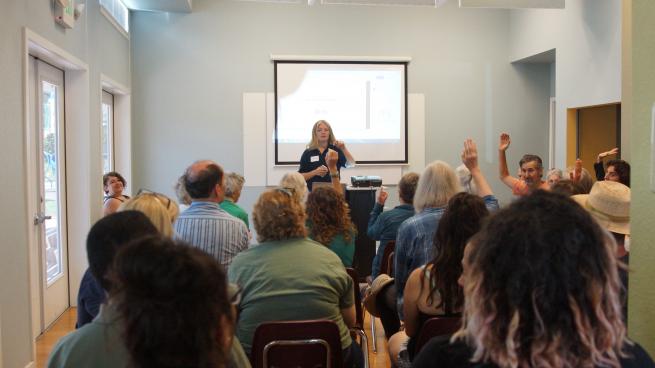 This article originally appeared in Zilient.

Revered for its natural beauty, the city of Boulder in the United States is a popular destination for those looking to enjoy the great outdoors.

But sitting at the foot of the Rocky Mountains in Colorado, the city is subject to drought, flash flooding, and rising housing costs. In recent years, eight mobile-home communities in Boulder have become the city’s best option for affordable housing.

Like most home owners, these residents want to make improvements to their neighborhood, save money on their bills, and strengthen their community.

Previously, a distant relationship between mobile-home owners and local government has made it difficult to do so and even prevented awareness of resources and opportunities available to them.

This relationship has improved over the last two years as mobile-home residents and city hall officials have worked together to build a stronger Boulder through participation in the Cities of Service Resilience AmeriCorps program.

The result of a months-long effort was a city organized workshop with Rebuild by Design in December 2017 to discuss the future of the Ponderosa Mobile Home Park.

For the first time, the Rebuild by Design workshop brought together 20 residents from Ponderosa with experts in housing, water, energy, finance, and social services to share their vision for a resilient and affordable future for their neighborhood.

The positive shift in the relationship between the city and the mobile-home communities did not start with a flier for a public meeting or an open house at city hall. Instead, it began when the city brought an opportunity directly to the community on an issue they both cared about: Water.

In August 2016, the State of Colorado legalized the use of rain barrels, giving residents a new and tangible way to build water resilience for their households and communities.

These barrels hold extra water during the rainy season, which can then be used by homeowners during dry seasons. This not only relieves pressure on the city’s stormwater infrastructure but also saves residents money on their water and utility bills.

Boulder’s Office of Resilience wanted to bring this new opportunity to residents. As a first step, they organized a rain barrel workshop, where an expert trainer explained the new policy and taught residents how to install rain barrels at their homes.

One of those participants, Isabel Sanchez, picked up a free rain barrel from the city and installed it at her home in the Mapleton Mobile Home Park where it caught the attention of her neighbors. When Mapleton residents requested another rain barrel workshop from the city, the Office of Resilience knew that the stage was set for “Impact Volunteering“.

Avery Ellis of Colorado Aquaponics demonstrates how to attach a drain at the bottom of a rain barrel. Photo courtesy of City of Boulder, Colorado

They spoke with residents about drought, flooding, and water costs, and together they planned an initiative called Boulder Barrels. This program would provide interested residents with both the skills and the supplies to install rain barrels for themselves and their neighbors.

Sanchez introduced Watkins to leaders in other mobile-home communities, and together they recruited 25 volunteers for the Boulder Barrels workshop.

The volunteers who attended the workshop were trained to be rain barrel installers, and they installed a total of 50 rain barrels in mobile-home communities across the city.

These rain barrels have a total capacity to capture 2750 gallons of water during every rain event, with the same amount of water savings.

The Cities of Service impact volunteering model gave the City of Boulder a new strategy for engaging directly with mobile-home communities on issues that matter.

“It’s a very powerful device,” said Guibert. “We walked the walk for how the city wants to do community outreach and engagement. We sent people into the community to work with volunteers who knew their own neighbors and they worked together to create meaningful impact.”

Sanchez was also supportive, stating “this has helped our little community become more sustainable and be part of the new policy in our state.”

Sunny Shaugnessy, a Boulder Barrel’s volunteer and resident of Mapleton was happy to have a rain barrel, especially in the dry months that followed the workshop.

“We haven’t had a lot of rain since we installed, but my barrel filled up, and I used it for my garden,” said Shaugnessy.

The new approach has invigorated engagement among mobile-home communities.

“The collective efforts of residents and the city on projects like Boulder Barrels and the Rebuild by Design Workshop have created significant momentum for mobile-home communities in Boulder,” said Watkins.

City departments will now be meeting quarterly with the Boulder’s Neighborhood Liaison to discuss how to improve access and delivery of services for mobile home communities. For example, the Department of Parks and Recreation hopes to bring their exercise programs directly to mobile-home communities in the future.

By bringing citizens and city hall together to address the problem of water management, the Boulder Barrels program strengthened the social fabric of mobile-home residents and built trust between the city and a previously unengaged community.

“The fact that it conserves water is icing on the cake,” said Guibert.

Boulder Barrels has since been a launching pad for mobile-home residents to organize and engage with the city in other ways too.

After the program, many of the volunteers and other mobile-home residents proposed changes to a city ordinance to strengthen tenants’ rights to privacy and prohibit retaliation. They advocated for these changes at a public hearing, explaining to City Council that mobile-home residents often feel powerless against park owners.

The changes to the ordinance were unanimously approved, and the residents earned praise from council members, including one who said, “It’s been inspiring to see the (mobile-home) residents organize themselves and form an even stronger community than I know you had before.”