These Savvy Cities Are Using Tech To Spark Citizen Engagement

Although an estimated 94% of Americans have web access today, many low-and middle-income families are saddled with a slow and unreliable connection. The Gigabit Center not only alleviates this often overlooked digital inequity but also gives locals an inviting place to meet and share ideas about improving their community.

Located near the banks of the Ohio River, the facility is part of what Grace Simrall, Louisville’s chief of civic innovation and technology has described as a citywide ‘digital inclusion strategy.’ By removing a barrier to high-speed connectivity, the city aims to provide underserved citizens with access to potentially life-altering opportunities online, such as applying for jobs, acquiring new job skills, and earning a degree. With the space, the city is also looking to leverage its local tech talent. At a civic hackathon last year, coders, designers, and urbanists tackled low voter registration and other problems.

Louisville’s Gigabit Center is an example of the types of local projects that are emerging around the globe to foster physical community and citizen engagement in an increasingly digital world. It’s not that city halls are shunning technology. On the contrary, municipalities from Athens, Greece, to Anchorage, Alaska, are fusing the best of analog and digital with the help of institutions such as Cities of Service. The New York City-based independent nonprofit supports mayors and chief executives in more than 235 cities in the United States and United Kingdom in their efforts to involve citizens in developing solutions to local problems. And its Engaged Cities Award, the winners of which will be announced this spring, is the organization’s first annual search for the best and most creative approaches.

“At its core, Cities of Service is focused on helping local leaders connect with their people to diagnose public problems and fix them,” says Myung Lee, executive director of Cities of Service. “Cities that effectively use technology as a tool to support this work are greatly expanding the impact of these efforts.”

The 2008 global financial crisis hit Athens like a wrecking ball. The Greek economy was decimated, and citizens throughout the country endured a combination of austerity measures, tax increases, and massive unemployment. In the immediate aftermath, 98% of Greeks believed government corruption was a major problem. Only 13% trusted their public institutions. Some wondered whether Greece would weather the storm, but a newly energized civil society bloomed. Unable to count on government for even basic services, Athenians stepped up.

“A new type of identity rose in the aftermath of the crisis,” says Amalia Zepou, Athens’s vice mayor for civil society and innovation. “It was defined by spontaneity and improvisation. Those people showed that some of their urgent needs were actually about a sense of ownership of their block or of the park across the street or of how they wanted to introduce visitors to the city.”

Eager to activate that grassroots energy, government officials developed synAthina. A Bloomberg Philanthropies 2014 Mayors Challenge winner, the online platform enables citizen groups to submit projects to a central server where they connect with like-minded groups and the corresponding government agencies. The resulting programs are then tracked on a publicly accessible map.

“We’ve collected almost 3,000 activities on synAthina,” Zepou says. “You can immediately see what citizens are doing in the city, whether that’s beautification projects or cleaning up a park. And the city isn’t just collecting the projects, it’s facilitating them and supporting them.”

SynAthina has proved effective with the recent refugee crisis as well. “There were hundreds of people who reacted to the inflow of refugees on synAthina,” Zepou says. “The refugee population waited so many months not knowing what was coming next and the citizens—active citizens—responded to this inertia and helped them.”

In effect, Athenians acted as an extension of their government, in some cases filling needs that couldn’t be addressed by formal bureaucracy. “People don’t only need language training and food and shelter, but also a way to become active in society again,” Zepou says. “Recipients become part of the things that are happening in the city. They’ll become active, just like the citizens who helped them.”

In December, citizen volunteers fanned out on the streets of Seven Trees, a neighborhood on San Jose’s southeast side. They passed low-slung bungalows and modest ranch homes. Spying an RV parked behind a house, one of the volunteers would text her findings. A few seconds later, she’d receive a response, asking for her location and more details: Does the structure have its own entrance? Where is it in relation to the primary dwelling?

Local Update of the Census Area, or LUCA, is designed to add historically undercounted communities to the 2020 Census. Such solutions are becoming critical as federal budget cuts inhibit the U.S. Census Bureau’s reach. Cities like San Jose understand the need to leverage technology to fix the problem themselves. 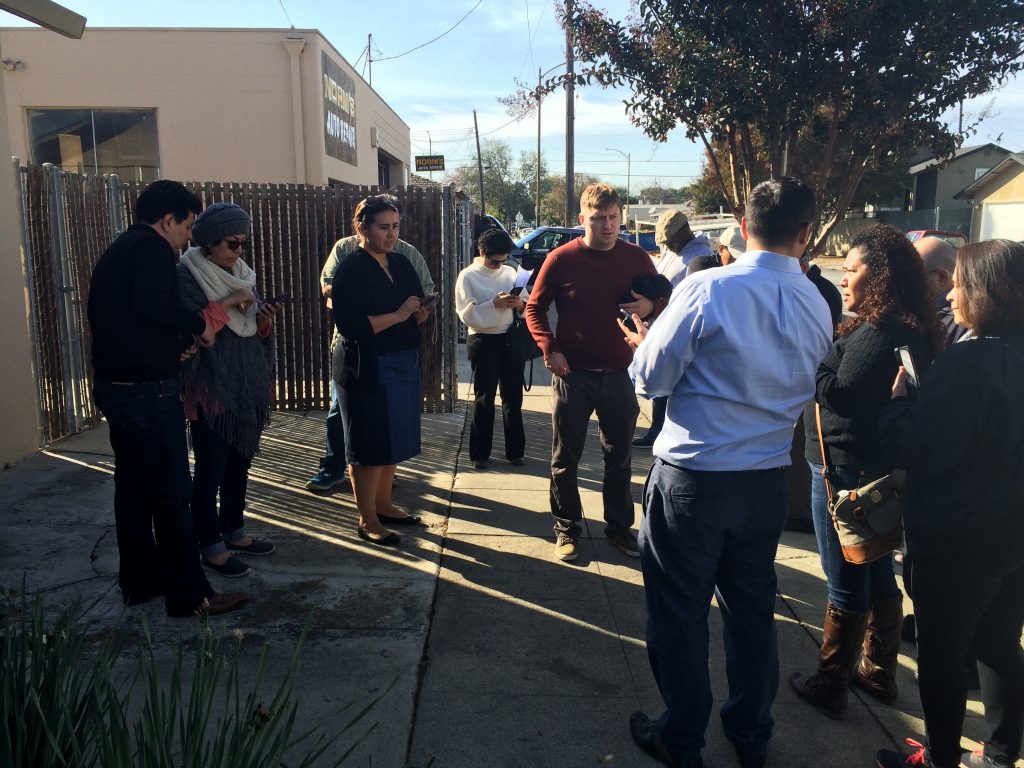 “We think community engagement and system collaboration can be a force multiplier for a far too sparsely staffed city hall,” says Liccardo.

Following the December pilot test, the full rollout of the texting tool begins this spring. It’s a potential data-gathering model for other cities facing the same Census shortfall; Cities of Service used the effort to develop the Citizen Sourced Data toolkit, which helps other cities replicate San Jose’s initiative. “Being the heart of Silicon Valley,” Liccardo says, “we think San Jose can be a demonstration platform for showing how we can make technology work for the common good.”

Over the last 50 or so years, a wall has gone up between citizens and city halls. The more insular and isolated local government became, the more residents turned cynical and withdrew. But slowly, the relationship has thawed in places where mayors are realizing the power of engaged citizens to combat shifting political and economic climates. Local officials are winning citizens over again, often through digital or mobile technology.

Last year, Anchorage Mayor Ethan Berkowitz launched the city’s Open Data Portal, part of a national trend to share the work of local government agencies. It allows the citizens of Anchorage, home to more than 40% of all Alaskans, to “harness public information,” Berkowitz says—information that fosters a sense of local ownership and leads to more involvement. In one central location, residents can now research everything from the declining burglary rate to inspections of childcare facilities and restaurants.

It also gives citizens insight into the efficacy of government and community efforts. Anchorage residents can see how programs targeting issues such as homelessness are performing in real time, information that enables them to hold local officials accountable. It’s another way that city halls are using transparency to reduce citizen apathy.

“One of the unique things that happens at a local level is that individuals have the ability to change the trajectory of government very quickly,” Mayor Berkowitz says. “When you have an engaged group of residents, you have the ability for government to be more functional and more representative. And that’s important in this day and age when there’s a lot of cynicism by design and efforts to suppress civic participation. We’re pushing back against that.”

Cities of Service couldn’t agree more. As it reviews applications for its Engaged Cities Award, the nonprofit is looking for the next great ideas from city halls around the world, novel solutions that counter cynicism, inspire residents and solve concrete problems in their communities. The winners will be announced in May.

This story was created for and commissioned by Cities of Service.