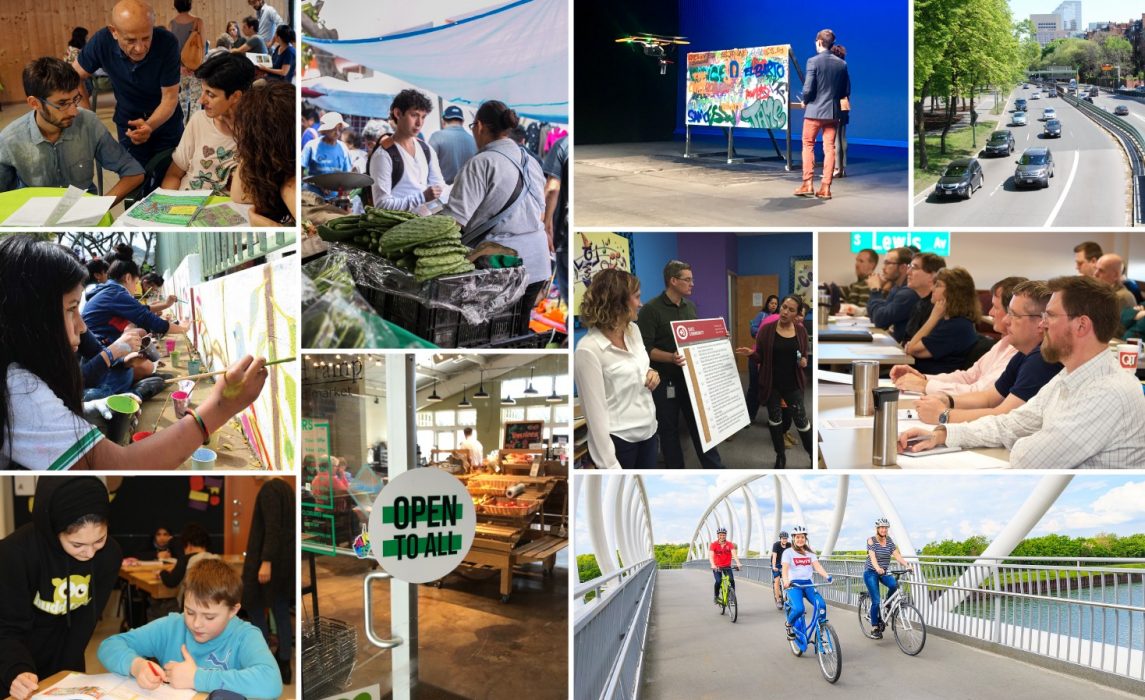 NEW YORK, April 16, 2018 – Cities of Service today announced 10 finalists for the Engaged Cities Award, a new effort to elevate cities that are working creatively to tap the wisdom, talents, and energy of community members to solve public problems. Underwritten by Bloomberg Philanthropies, the Award shines light on the growing number of ways city leaders are co-creating the future with residents, enabling cities around the world to learn from best practices and bring effective strategies back to their own cities.  The Award is part of Michael R. Bloomberg’s American Cities Initiative, a program designed to empower city leaders to generate new ideas and advance policy that moves the nation forward.

In its inaugural year, the Engaged Cities Award received more than one hundred applications from cities in the Americas and Europe. The 10 finalists were selected because their efforts scored highest on key selection criteria, including significant work with citizens to tackle a public problem, clear evidence of impact, and potential to apply the strategy to other problems and geographies. The 10 finalist cities are:

“The finalists show that everyday citizens can help move their cities forward in many diverse and meaningful ways, leveraging their insights, diverse talents, and creative energy,” said Myung J. Lee, Cities of Service Executive Director. “City leaders are getting more creative and experimental in the ways they are engaging community members. We are proud to highlight the work these cities have accomplished so other cities around the world can follow their lead.”

Local leaders are increasingly looking for new ways to involve residents in policy and program development and build trust between citizens and city government. In its recently released 2018 American Mayors Survey, Bloomberg Philanthropies found that 91% of American city leaders say engaging residents is “very important”—ranking it even higher than using data, experimentation, and collaboration. Through the Engaged Cities Award, Cities of Service aims to surface a set of tools these mayors can employ to collaborate with residents in new and more significant ways. These approaches include harnessing the power of civic tech, citizen experts, informed citizen input, participatory design, impact volunteering, and citizen-sourced data.

“People are often a city’s greatest untapped resource,” said James Anderson, Cities of Service board member and head of government innovation programs at Bloomberg Philanthropies. “These cities are changing that – finding new and better ways to involve their residents and leverage their expertise to solve public problems.”

The Engaged Cities Award was open to cities with populations of 30,000+ in the Americas and Europe. Cities submitted their applications in January 2018. Cities of Service, along with an esteemed group of experts, will choose three winning cities, including a $100,000 grand prize winner. Winners will be announced as part of the Engaged Cities Award Summit and Dinner in May 2018.

About Cities of Service

Cities of Service is an independent nonprofit organization that helps mayors and city leaders tap the knowledge, creativity, and service of citizens to solve public problems and create vibrant cities. We work with cities to build city-led, citizen-powered initiatives that target specific needs, achieve long-term and measurable outcomes, improve the quality of life for residents, and build stronger cities. Founded in 2009 by New York City Mayor Michael R. Bloomberg, Cities of Service supports a coalition of more than 235 cities, representing nearly 55 million people in 45 U.S. states, and more than 10 million people in the U.K. Visit us at citiesofservice.jhu.edu or follow us on Twitter @citiesofservice.