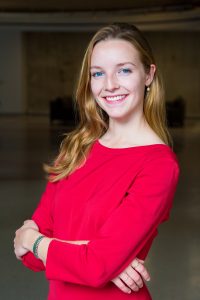 As a Resilience AmeriCorps VISTA in the city of Phoenix, Willa Altman-Kaough managed a series of Cities of Service-funded community resilience workshops in vulnerable areas of the city, with the goal of enhancing community preparedness to extreme heat and flash flooding. She also helped expand the city’s heat relief campaign. When this interview was conducted, Willa was an council aide for Phoenix Mayor Kate Gallego, who was a member of the city council at the time. She is now the Policy Advisor for the mayor.

How did your service year prepare you for the work you’re doing now?

My service year prepared me very well for this position. [I learned about] everything from interpersonal communication to representing the city when you’re speaking with constituents—even interdepartmental relationships. Having that foundation from my AmeriCorps year really allowed me to jump right into this. I also have a sense of the residents’ perspective from my conversations with them as a VISTA. I have a better idea about city needs and city priorities and a better understanding of the culture of the city. This position would be a total whirlwind if I didn’t have that experience.

I gained a ton of respect for all the city employees and for all the services and resources that the city offers. I’ve seen that it’s hard work, it takes massive amounts of coordination and it’s a continuous project, you’re always thinking about how you can better serve residents.

Can you give me one specific project that has prepared you for your work with the councilwoman?

Taking the community resilience workshops as an example—we identified a community need. After figuring out the community need, we figured out what city resources were available and what kind of curriculum we could create to address these issues. In this case it was preparedness through extreme weather events, which were extreme heat and flash flooding. Then we thought about who our direct partners were that could help us out with this, then we reached out to them. We worked heavily with the Fire Department. From there we invited community stakeholders and residents to these events. There was this whole process of where do we begin, and how do we get to where we want to go.

Did you go in with any expectations that changed during your year of service?

I wasn’t involved in local government in my hometown. It was really my VISTA year that taught me about local government. I gained a ton of respect for all the city employees and for all the services and resources that the city offers. I’ve seen that it’s hard work, it takes massive amounts of coordination and it’s a continuous project—you’re always thinking about how you can improve, how you can be more innovative, how you can better serve residents. I’ve always been interested in public service, but I really gained an appreciation for local government, because it’s such a direct relationship with the residents.

Read our Where Are They Now? Series