Behind the Scenes of Love Your Block 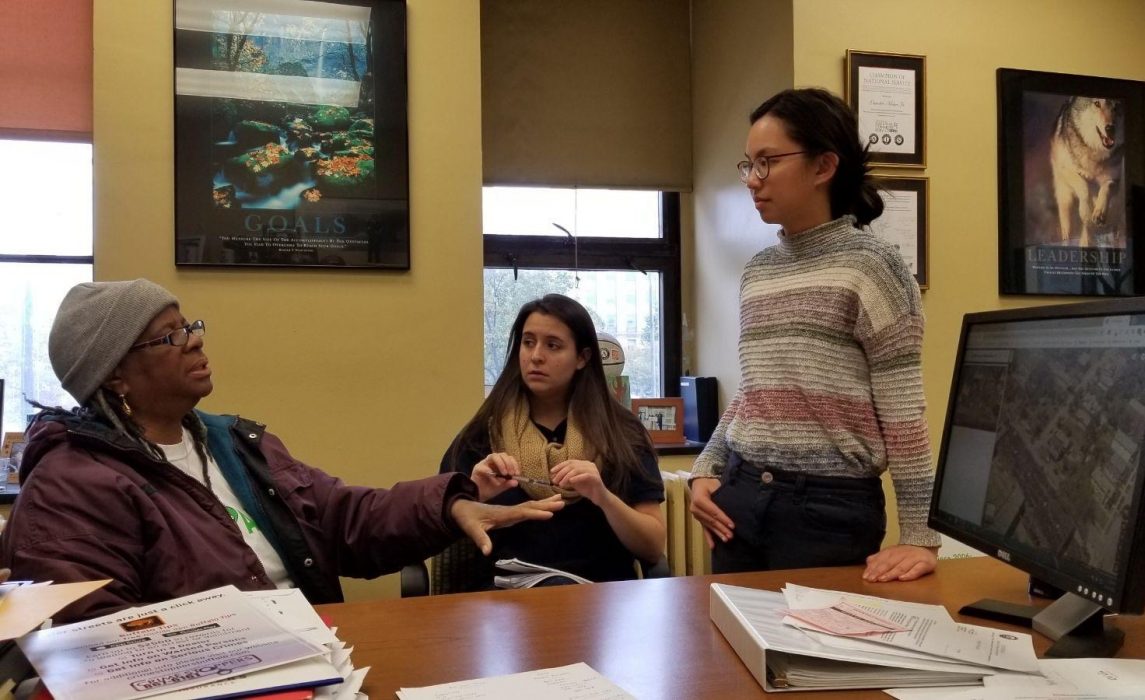 Buffalo, New York, just publicly launched its Love Your Block program, but city staff and Cities of Service AmeriCorps VISTA members have been working hard on the program behind the scenes since September.

“The first quarter of our service year has been about building relationships internally in city hall, and externally with residents and other community based organizations and block clubs,” explained Emily Gallivan, one of two AmeriCorps VISTA members in Buffalo. “We’re trying to gauge how our city defines blight and how the community is interested in addressing it.”

Buffalo is one of ten cities participating in the 2018-20 Cities of Service Love Your Block program. Most of these cities are industrial, legacy cities that have seen population loss in recent decades, leaving many neighborhoods with vacant lots and abandoned properties. Through the program, the cities award mini-grants to community groups for neighborhood revitalization projects to address blight.

But Love Your Block doesn’t begin with the competition for the mini-grants. It begins when the city decides it wants to address blighted properties to make neighborhoods safer with the help of residents. Since then, the city staff and AmeriCorps VISTA members have gone about the essential, but not easy, work of creating strong, working relationships with residents and community groups in targeted communities.

Emily and Nina Dinh, the other AmeriCorps VISTA member in Buffalo, have attended more than a dozen block club meetings, weekend breakfasts for seniors hosted by the Masten Block Club Coalition, and participated at the evening children’s program at the Buffalo Science Museum.

“We have the advantage of not being recognized as public figures,” said Emily. If residents already have negative opinions about the city government, the AmeriCorps VISTA members can reach out and help them get past that. “They see us as people who are trying to do good, and they are willing to listen to us and open up more to us as a result.” 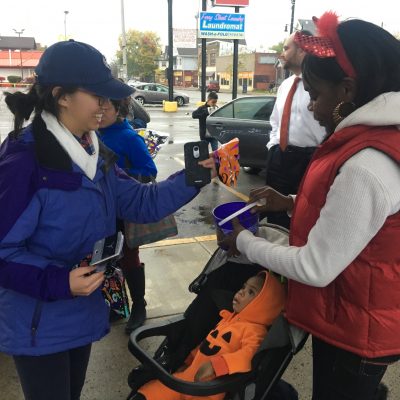 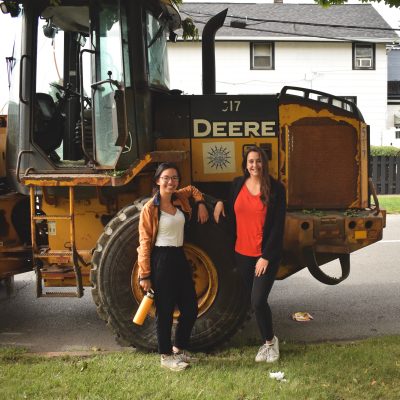 The AmeriCorps members began this process by participating in an existing Buffalo program called Clean Sweep, through which city staff and volunteers go out once a week in the warmer months to different target communities and spend a day cleaning up neighborhoods and connecting with residents. During that time Emily and Nina formed relationships both with residents and staff from other city departments.

When Clean Sweeps ended for the year, Emily and Nina went out on their own to knock on doors and let communities know about the new Love Your Block program, but first they had to figure out who they needed to speak to. The city wants to focus on high-need neighborhoods with many vacant lots. AmeriCorps VISTA members are also required to focus on low-income communities during their year of service. Finding the right communities where their work would have the most impact took weeks of looking through city data.

“We were looking at vacancy rates, poverty rates, community assets,” explained Nina, “using open data and also looking at other resources, green spaces, schools – anything we could build on.”

They evaluated 18 neighborhoods and settled on four with high poverty and vacancy rates: Kensington-Bailey, Broadway-Fillmore, Masten Park, and Lower West Side.

“The first door we knocked on the resident was concerned about gun violence. The second person broke down in tears because of violence she had witnessed. It challenged our ideas of what this project was going to be and it emphasized the importance of city involvement and direct engagement.”

Then it was time to spend some more time out in the neighborhoods before the weather became too cold.

“It was harder because it was a smaller group, but helped us to really visualize what blight looks like in those communities,” said Emily, a Buffalo native. She was surprised at the extent of blight and illegal dumping in some neighborhoods. “It’s definitely broadened my perspective of my own home town. ”

The interactions weren’t always easy. Some residents had no interest in talking to anyone from the city, and they were even met with tears.

“The first door we knocked on the resident was concerned about gun violence – a gang had robbed his property,” said Emily. “The second person broke down in tears because of violence she had witnessed. It challenged our ideas of what this project was going to be and it emphasized the importance of city involvement and direct engagement.”

“We want to see what they care about in their community and how we can tie into that,” said Nina. “Once we explain our program they have a lot of questions.”

Residents might want to know what kind of projects they can apply for, or want help creating an application. Sometimes the questions have nothing to do with Love Your Block. When that happens, they make sure to connect the residents with someone who can address their concerns, like the Board of Block Clubs or city staff like the city’s crime prevention coordinator.

“I was impressed by how much work some of the community members put into their neighborhood,” said Nina.

There’s plenty to do when they’re not out in the community. They’ve spent many hours creating a user-friendly application with the help of Cities of Service. They also communicate regularly with fellow AmeriCorps VISTA members via Slack implementing their own Cities of Service Love Your Block programs around the country, sharing advice on creative engagement techniques or tips for developing websites.

AmeriCorps VISTA members Nina Dinh and Emily Gallivan with Oswaldo Mestre, chief service officer and director of citizen services, at the Cities of Service Love Your Block Academy, where staff from grantee cities learned about best practices and began planning their Love Your Block programs. 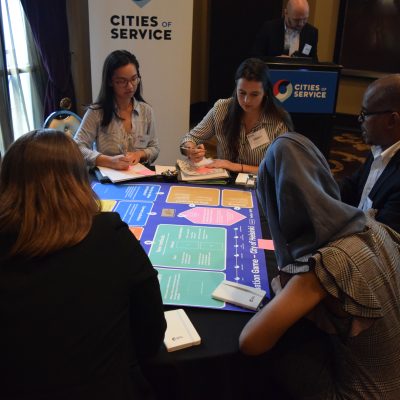 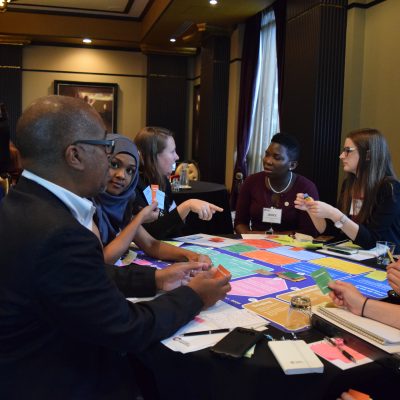 The efforts of the AmeriCorps VISTA members and Cities of Service are having ripple effects elsewhere in the city, too. Mayor Byron Brown was recently recognized by Voices for National Service as a Service Champion. Emily and Nina also joined Oswaldo Mestre, chief service officer and director of citizen services, in Saskatoon in Saskatchewan, Canada, when the city received a grant from 8 80s Cities, an international civic organization based in Canada. The Wintermission grant program is aimed at increasing physical activity during the winter months and some funds will go toward Love Your Block projects. Buffalo’s work with Cities of Service has helped them determine the scope of their blight remediation efforts and think strategically about engaging residents. City staff credit this relationship with positioning them for these opportunities and obtaining additional funds from foundations like Cities RISE and the Independent Health Foundation.

The city officially announced its Love Your Block mini-grant competition in early March. Other cities have also recently begun to accept applications for Love Your Block projects, which will be implemented this coming summer. Buffalo will accept applications and then work with community groups to help them refine their projects, provide support for supplies and tools, and services like trash pick-up.

In the meantime the AmeriCorps VISTA members in Buffalo will continue to be out in the neighborhoods developing relationships with citizens, leading to stronger and safer neighborhoods and more communities connected to the city and one another – effects that will last far beyond the implementation of the Love Your Block projects.

“That’s why the program is needed,” added Emily. “To heal wounds and build bridges. That’s what makes it worthwhile.”