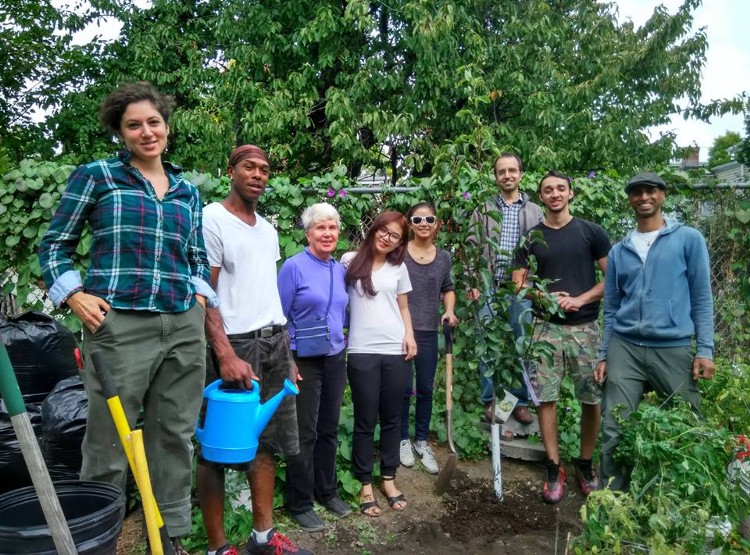 t was the summer of 2015 — Kannan Thiruvengadam was one of many East Boston residents who frequently walked by the decrepit lot at 294 Sumner Street and thought: this could be something positive.

Kannan joined other East Boston residents to apply for a land permit through the Department of Neighborhood Development, which agreed to grant them a temporary permit to pilot the farm. The residents cleared the soil and installed elevated beds to safely plant flowers, fruits, vegetables, and herbs and, with that, the space became Eastie Farm.

Initially, the family that lived in a home bordering the lot was nervous about the effect the farm would have on their life. Kannan met with the family and heard their concerns — that they’d be left out, that the project would drive up real estate prices. Kannan helped reassure them that this farm is a positive thing for the community.

He said that there were no monetary profits to be made off the farm. Rather, he was interested in tuning into the neighborhood’s natural and social ecosystem.

After learning that this family also struggled with water damage on their roof, the Eastie Farm volunteers installed a new downspout to divert rainwater from their roof into a rain barrel in the farm. Not only did the family no longer struggle with water damage, the farm was able to repurpose the rainwater for watering plants.

The family grew to become advocates of the farm, and will eventually build a hoop house that will rest against the side of their home, helping to protect the home’s pipes from freezing during cold winter days.

After a successful growing season with neighborhood support, the permit was extended and in the nearly two years since then, the farm has evolved enormously — with community members all pitching in to ensure its continued success. East Boston residents at Eastie Farm participate in an Earth Day work day and kick off the growing season.

Jason, a young boy who lives in the apartment building next door, brings his fruit and vegetable waste to the farm to add to the compost pile and to help cultivate worms.

Frank, who calls himself the Mayor of East Boston, and Pooja, who works at the liquor store nearby, attend as many workdays as they can. Stefano and Robert are students at Suffolk University who volunteer their time whenever they’re able. Eli, a landscape architect, lends his expertise to the group by making sure installations are established securely.

Community cohesion is strong here. Planning to create a toolshed on the lot, East Boston residents built an elevated wooden platform to serve as the shed’s foundation. To their surprise, community members started using the platform as a place to perform music. Now, Eastie Farm plans to leave the platform as-is, since it draws residents into the space.

In 2016, the community started holding Tierra Bella festivals, which means “beautiful earth” in Spanish. A significant portion of East Boston residents are Spanish-speaking, and all signage in the garden is in both English and Spanish.

“It’s really important to ensure everyone can participate, and that everyone knows that they’re welcome, and bilingual signage is critical for that,” said Margaret, an East Boston resident.

Recently, the East Boston neighborhood came together again to take the farm to the next level by applying for a Love Your Block grant through the City of Boston’s Office of Civic Engagement. In order to be eligible, neighbors formed the Eastie Farm neighborhood association and were awarded the grant. With their Love Your Block grant funds, Eastie Farm has purchased improved rain barrels, a new composting system, raised bed materials, and weatherproof signage in both English and Spanish. In Kannan’s words, “We know we have issues like heat island effect, and the way to engage and address issues like that is to do something positive. When you get the community together to grow food, to work with kids like Jason, to get to know one another: this has long-term and short-term returns. In the short-term, neighbors now know each other and can rely on one another in a crisis. On the long end, we’re building a source of local food and addressing climate change.”

Judy Gates, a Marblehead resident, was visiting friends in East Boston two years ago when she learned about Eastie Farm. She began to get involved in work days, and now that Eastie Farms is a 501c3, she serves as the secretary. She’s even moved to East Boston part time to be able to be here more often. She says she was drawn to this project because of the special commitment by the community to “developing the resiliency of this property, both in terms of restoring soil, providing food in a food desert, and working hand in hand as a community.“

She continued: “It’s a place where you’re accepted no matter who you are. This is a place that makes people feel welcome and this is a place for love.”

On Saturday, April 22, more than 20 volunteers were working in the farm to kick off its second growing season. Now when East Boston neighbors walk past that lot, they can say with pride that there is, indeed, something positive there.