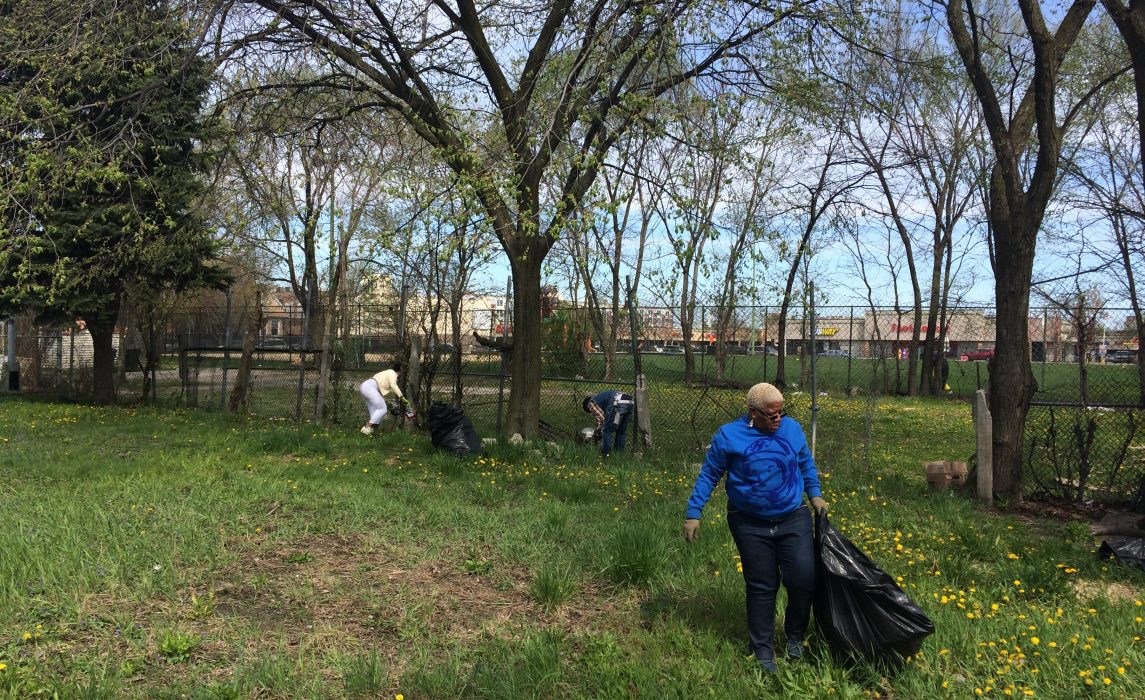 n Chicago, Illinois, local government is working to strengthen communities and engage with citizens on a diverse set of issues, including resiliency. “Chicago’s largest resilience challenges are around social and economic resilience, including blight, divestment, and a lack of social cohesion in many neighborhoods,” said Aaron Koch, Chicago’s Chief Resilience Officer.

When Cities of Service Resilience AmeriCorps members Trevor Riley and Johannes Dreisbach arrived in Chicago, they wanted to target these challenges. They discovered a potential way to address these issues when they learned about the city’s Clean & Green service days.

For the past two decades, the Chicago Department of Transportation and the Chicago Department of Streets and Sanitation hosted Clean & Green events once a year. During the service days, residents, civic associations, and community groups came together to beautify public spaces in neighborhoods. These service days were organized by Ward Superintendents as large, spring cleaning-style events. Outside of these formal events, the city offered year-round assistance for citizen-driven neighborhood cleanups, including a tool-lending library and a post-cleanup event garbage pickup service. However, these services were underutilized because citizens were largely unaware of their availability, and neighborhood groups didn’t know how to organize cleanups on their own.

The AmeriCorps members recognized that by bringing together diverse stakeholders to improve their physical environment, the Clean & Green events provided a framework for a connected, resilient community. Riley and Dreisbach wanted to expand Chicago’s commitment to strategic service in low-income and underserved communities by enhancing the Clean & Green events and informing Chicagoans of the services available to them year-round. “Obviously you don’t spend just one day a year caring about your neighborhood,” said Riley. Inspired by the current program, they embarked on a journey to engage low-income residents in ongoing neighborhood revitalization. The AmeriCorps members consulted with Cities of Service and developed a plan to host more Clean & Green events, as well as enhance several aspects of the program, including the marketing strategy, the programmatic relationships within City Hall, and community partnerships. They planned to schedule additional Clean & Green events to provide citizens with more opportunities for community networking and engagement, while beautifying their neighborhoods. The AmeriCorps members also planned to provide neighborhood groups with the resources to organize their own independent cleanup events year-round. “We want to breathe new life into this existing program,” said Riley.

The team knew that marketing the events was key to galvanizing volunteers and spreading knowledge of available cleanup resources. Clean & Green events had historically been marketed using fliers and press releases, but the AmeriCorps members wanted to develop a more comprehensive strategy to get the word out. Working with Cities of Service, they considered marketing mechanisms that would be effective for reaching more citizens. They are now working with the Department of Streets and Sanitation to update the Clean & Green website to include maps of cleanup locations, metrics from previous events, and online forms for tool lending and garbage pickup requests. The team developed a mock-up of the new website and a long-term plan for publicizing events and resources on social media.

The AmeriCorps members are utilizing their unique position within City Hall to better connect low-income and marginalized citizens with the city, helping to ensure that city services are meeting the needs of the people. “We’re working to identify opportunities for volunteering that overlap with existing Streets and Sanitation services, like filling potholes, trimming trees, and dumping debris,” says Riley. Through this approach, “we can get city staff interacting with the community and creating a much larger impact than a simple neighborhood cleanup.” Focusing in the traditionally low-income, south and west parts of Chicago, Riley and Dreisbach also had the idea to use their relationships with community organizations to broker partnerships and expand citywide capacity for citizen-driven events beyond the traditional Clean & Green service day. “We want to create a network, make sure people know about existing available services, and help organizations run their own cleanups,” said Dreisbach. The AmeriCorps members hope that knowledge of tool-lending libraries and other available resources will galvanize community organizations to organize their own cleanup events and take blight elimination into their own hands. “We want these organizations to run cleanups successfully,” said Riley. “They can’t do it alone, so we want to put them in the best position to help themselves.”

Dreisbach is excited about the steps the team has taken to expand the program. “It’s great to empower individuals and show that they can play a large role in improving their communities,” he said. “Getting neighbors out together, having them meet city staff, and cleaning their neighborhoods will help strengthen connections and social cohesion in these neighborhoods, while reducing blight.” “The AmeriCorps members are helping citizens have a greater voice, and a greater role, in improving their communities,” Koch said. “They are making an existing program stronger by more thoughtfully and thoroughly engaging citizens.”