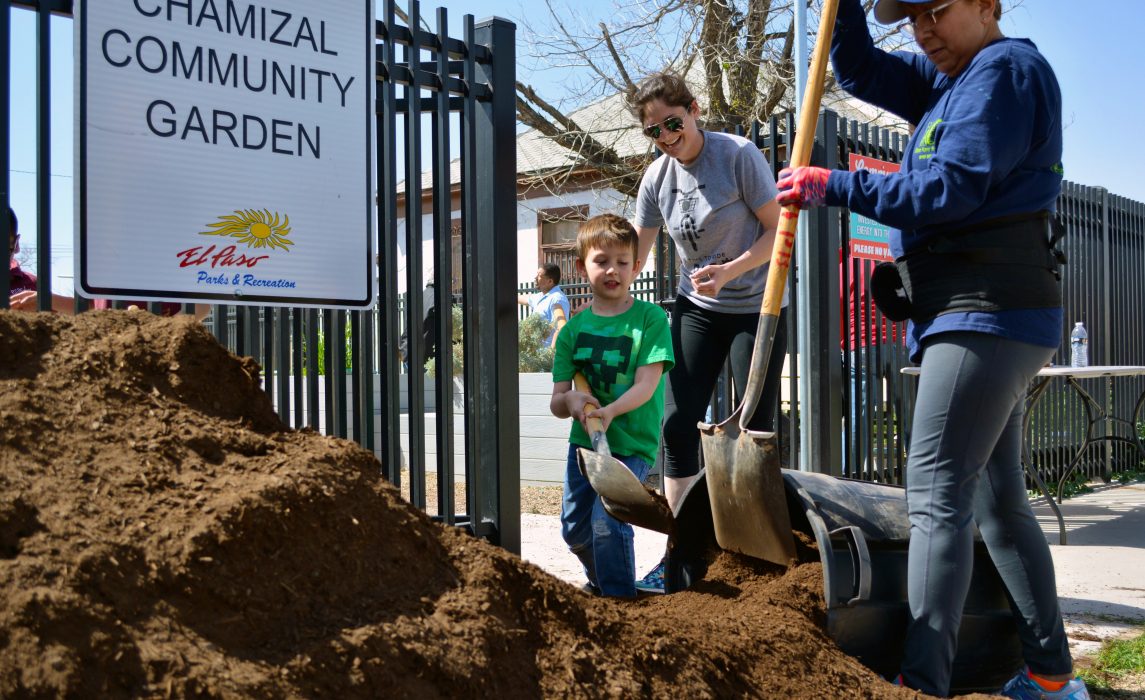 desert city in far west Texas bordering New Mexico and Mexico, El Paso is the 20th largest city in the United States, with nearly 700,000 residents. In the center of its southern border lies the Chamizal neighborhood, an area that has long struggled with poverty and was once part of a nearly century-long land dispute between the United States and Mexico.

Home to the International Bridge of the Americas, one of the busiest international border crossings along the US-Mexico border, much of Chamizal’s population travels back and forth on a regular basis. However, there are also many residents who have owned their homes for three or four generations.

As in many low-income areas in the United States, Chamizal has few supermarkets, making access to fresh produce limited. A 2011 USDA report stated that El Paso County had more than 177,000 food-insecure people, including 85,000 children. Additionally, 30 percent of El Paso County residents lived in “food deserts.” This is double the state level and triple the national level.

A Neighborhood Builds on a Foundation of Resilience

The people of Chamizal, with support from the city and others, have been working hard to revitalize and lift up their neighborhood for the last several years. Today, there is excitement about what is possible. As El Paso’s Chief Resilience Officer and lifelong resident Nicole Ferrini explains, “while this community is considered to be one of our most vulnerable, it is also one of our most resilient.”

El Paso is one of 10 U.S. cities selected to receive Cities of Service Resilience AmeriCorps members. The AmeriCorps members serve full time in city hall, engaging citizens in low-income areas to help increase the city’s resilience. Candice Heins, who had already been volunteering with the city’s Office of Resilience and Sustainability because of her personal passion for helping people and cities become more resilient, applied and was accepted to the program.

To showcase and build upon the Chamizal community’s resilience, early in 2015, El Paso had turned a vacant lot in the neighborhood into a community garden. However, the initial excitement and momentum wore off, and the garden fell into disrepair. With new power and purpose in the form of AmeriCorps members, and a proven framework from the Cities of Service Love Your Block Blueprint for neighborhood revitalization, Ferrini, Heins, and others made a plan to bring the Chamizal Community Garden back to life. True to the Cities of Service model, Heins and Ferrini worked hard to bring multiple stakeholders to the table to capitalize on the work and missions of existing organizations. They connected them to each other, to the residents, and to city hall. This helped everyone bring their own skill set to the project and learn from others at the same time.

In February 2016, 20 community members — including neighbors of the garden; students, teachers, and families from nearby Beall Elementary School; students from Ysleta High School; and University of Texas at El Paso’s Environmental Advocates student group — worked alongside city staff to pick up trash, remove weeds, and get the planting beds ready for spring.

The energy created by the cleanup was infectious. As Ferrini notes, “Not only were people engaged with us in cleaning up the lot, but we started to notice that folks were cleaning up all around the neighborhood.” Community members have adopted plots and are taking increasing ownership in garden operations.

“The mistake that gets made a lot, especially in neighborhoods like the Chamizal, is that when folks come in and want to help, the residents want to accept the help but they don’t want to feel vulnerable. Community members have a lot of strength to bring and that needs to be acknowledged.”
— Nicole Ferrini, Chief Resilience Officer

Cities of Service and Ferrini provided technical assistance and support that enabled Heins to turn the cleanup, education, and subsequent planting at the Chamizal garden into a pilot for sustainable community gardens across the city. To ensure sustainability and build capacity, Heins worked with community members to organize several gardening workshops with El Paso Master Gardeners, and a composting workshop with a total of more than 100 participants. With a strong infrastructure and best practices in place, El Paso is now building on the success in Chamizal with a Garden Grant Program, which will enable individuals and community organizations to expand and sustain local citizen-led food production throughout the city. Volunteers work together to clean up the Chamizal Community Garden. City Attributes Success to Following the Lead of Its People

Key to the success of the Chamizal community garden and other work that has followed is the true engagement of community members in the process. Ferrini explains, “The mistake that gets made a lot, especially in neighborhoods like the Chamizal, is that when folks come in and want to help, the residents want to accept the help but they don’t want to feel vulnerable. Community members have a lot of strength to bring and that needs to be acknowledged.” Ferrini makes sure her team remembers this at every turn. “We have worked hard to identify what’s important and what we can learn from these neighborhoods versus just coming in and saying, ‘This is what we’re going to do for you, or to you.’”