Building Resilience in Pittsburgh, Pennsylvania: Adapting for the Next Generation 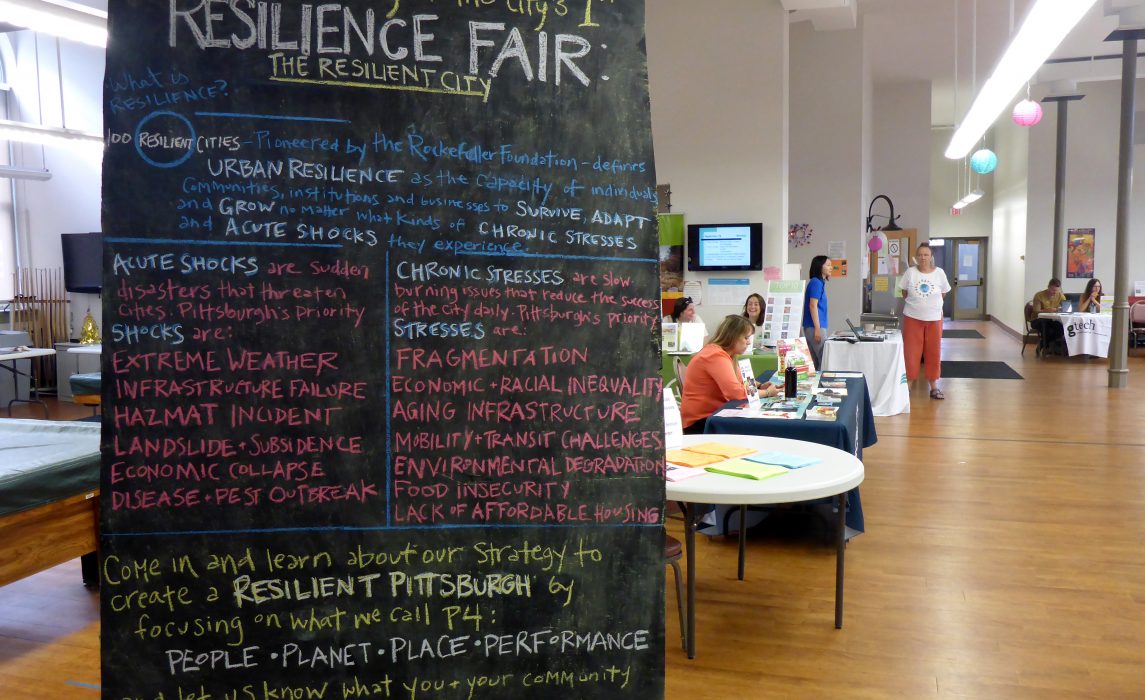 ocated at the confluence of the Allegheny, Monongahela, and Ohio Rivers, Pittsburgh was once known as the “Gateway to the West.” With easy-to-navigate waterways and abundant resources like coal, timber, and iron, Pittsburgh grew into an industrial powerhouse and forged a reputation as the “Steel City.”

Over the last half century, however, industrial manufacturing has folded under pressure from a changing economy — giving Pittsburgh yet another chance to define itself.

Celebrating its 200th anniversary in 2016, Pittsburgh has reinvented itself as a resilient hub for technology, education, healthcare, and finance.

While making an impressive transformation, Pittsburgh has not rebounded uniformly. With the loss of industrial jobs came divestment and movement away from manufacturing neighborhoods, leading to regional fragmentation and increased socioeconomic inequality.

Social stressors have been exacerbated by environmental challenges such as natural disasters, aging infrastructure, and hazardous materials incidents.

These challenges, however, are no match for the grit and ingenuity of Pittsburgh residents — they are taking action to build a resilient Pittsburgh.

As part of the 100 Resilient Cities network, the City of Pittsburgh hired its first ever resilience-dedicated staff, with Chief Resilience Officer Grant Ervin leading the team as they develop and implement a citywide Resilience Strategy.

The strategy will facilitate better coordination between city departments while educating residents about ongoing resilience efforts so they are empowered to make change within their own neighborhoods.

“There are so many opportunities for people to get involved; it’s almost overwhelming. So, how do we wrangle everything that’s going on to create a better-trained cohort of engaged citizens?”
— Rebecca Kiernan, Senior Resilience Coordinator

To jumpstart the initiative, the two AmeriCorps members — Alex Cupo and Emily Costello — organized the city’s inaugural Resilience Fair in September 2016 and engaged the public in a dialogue about resilience. Pittsburgh residents pinpoint resilience challenges in their neighborhood and learn about resilience efforts at the Resilience Fair. Pittsburgh residents pinpoint resilience challenges in their neighborhood and learn about resilience efforts at the Resilience Fair.

“For a lot of people, the word resilience doesn’t immediately ring any bells, but we got to discuss what it could mean for individuals, for neighborhoods, for the city, all while getting feedback from the community,” says Costello.

At the fair, more than 20 nonprofits and community-based organizations gathered at the South Side Market House, a city-owned senior center, to showcase citywide resilience initiatives and educate citizens about available services. More than 100 residents attended the fair and reported feeling more informed.

“The fair made me aware of things I would have never thought of on my own,” says one participant. Residents learned about volunteer opportunities in their neighborhood and how community-based organizations are working together on citywide resilience initiatives. “(The Resilience Team) serves as an integrator. (Government) agencies usually stay in their own lane, but we intersect them and connect service areas that may never talk to one another to improve efficiency and create co-benefits,” says Ervin.

To show community members what can be achieved through the power of collective effort, the resilience team helped coordinate a cleanup of the Hazelwood Greenway — a low-income and historically disadvantaged area — with community-based organizations such as the the Environmental Services Department. Partnering with University of Pittsburgh’s Make a Difference Day, over 70 student volunteers were engaged to remove knotweed and grapevine over an acre of land to create a trail for Hazelwood residents. The Hazelwood Initiative, a community-based development corporation, serves as a local steward for the greenway, providing tools and leadership for the volunteer effort. The demonstration showed residents what can be achieved through Impact Volunteering and prepared the City of Pittsburgh to embark on a new phase of its Resilience Strategy: Love Your (Resilient) Block.

With funding from Cities of Service, the city is offering mini-grants of up to $1,500 and technical assistance by the AmeriCorps members to carry out projects. The City of Pittsburgh is already seeing changes in the community. Residents are eager to get involved in resilience efforts and have already submitted a record-breaking 33 applications for neighborhood revitalization projects. These projects will take place in 23 neighborhoods — 74 percent of which are moderate to low-income — and will not only build relationships between neighbors, but will help convert neglected lots into vibrant public spaces all residents can enjoy.

“We’ve been able to create not just better connections between our partners in the resilience effort, but also to take that message to the community and be better connectors for our residents.”
— Grant Ervin, Chief Resilience Officer

Over the last 200 years, Pittsburgh has transformed from a rigid city of steel to a flexible, resilient city that is engaging citizens in its bright future.