Building Resilience in Minot, North Dakota: Redefining a City’s Relationship with its River 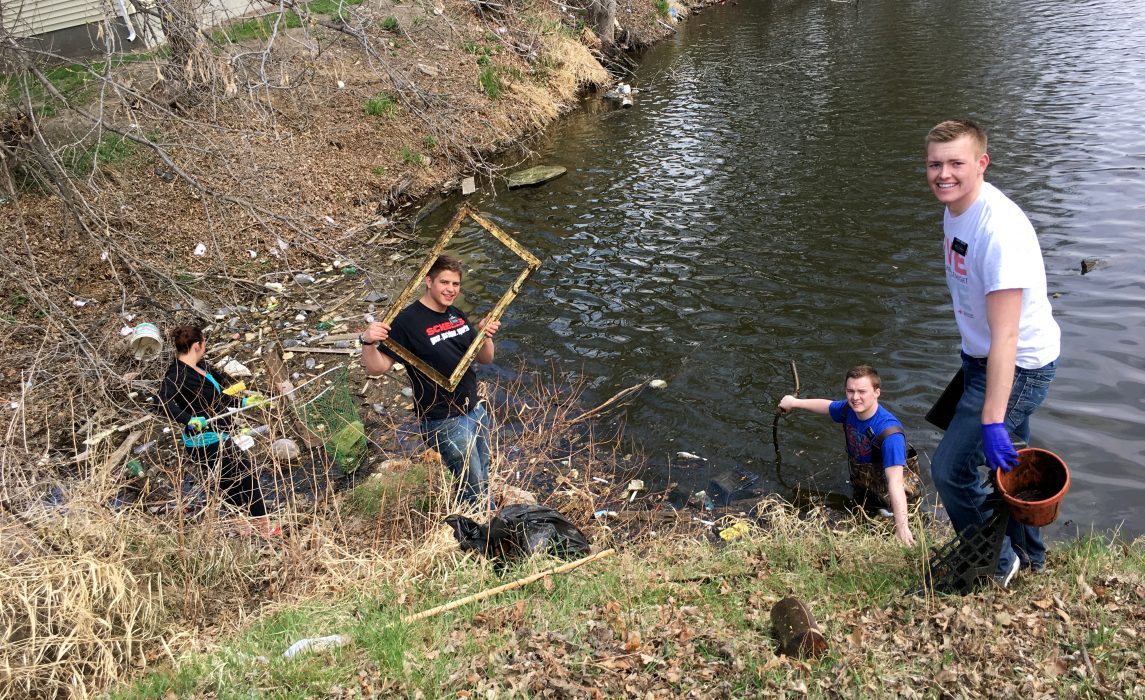 he Souris River in Minot, ND has flooded several times in the last century, causing devastating destruction to the town. The most recent flood in 2011 caused nearly $700 million in damage. 12,000 people had to be evacuated, and 4,100 homes and businesses were flooded, some for several weeks. Understandably, the people of Minot view the river as a danger rather than an asset.

Additionally, several areas of the river are cut off from the overall flow. Unfortunately, these oxbows, as they are known in Minot, are stagnant eyesores that have collected tons of trash and debris because of Illegal dumping and flooding.

Minot’s AmeriCorps members, Nancy Simpson and Mia Dillard, began their year of service by asking: What does Minot need to be more resilient? Alderman Shannon Straight, a third-generation resident of Minot and a former AmeriCorps member himself, supported their efforts and taught them about the work already in progress in the community.

Key to the AmeriCorps members’ success was making sure that the town’s 50,000 residents were part of the process before planning began. “The city can then make informed decisions about the river with public feedback as opposed to having a public hearing about something that’s already been 95 percent planned. It also gets people more interested and invested in community planning,” said Simpson.

The AmeriCorps members met with community groups, neighborhood associations, and individuals to understand the issues facing Minot and learned that there was a great desire to improve the community’s relationship with the river. As Dillard highlighted, “Being able to engage with citizens about their future and what they want it to be is essential.” While important for the entire community of Minot, making the river accessible to those not able to travel to other places for water recreation was critical. Dillard and Simpson worked with Straight and Minot Chief Resilience Officer Donna Bye to formulate a plan that began with cleaning up the river. An important element of their work was to ensure sustainability. As Dillard stated, “You have to have an overarching, long-term plan so 20 years from now, things won’t be the same as they are today.”

The AmeriCorps members got buy-in from City Council members and the mayor, and conducted a door-to-door awareness campaign. Bye connected them with organizations that could help with the cleanups, including corporate partners, and the city’s Emergency Services, Parks, and Public Works Departments.

During the first cleanup on Earth Day, volunteers removed more than seven tons of garbage from the river and its banks, including hot tubs, coolers, lawn chairs, car parts, tents, and hard metal scraps — some of which had been in the river since the 2011 flood. To date, more than 200 volunteers, including city leaders, community organizations, and individual community members, have cleaned up several miles of river and removed 15 tons of garbage through three cleanups. There are several volunteers who repeatedly participate in cleanups and are deeply committed to improving Minot’s river perception and culture.

One of the additional benefits of the cleanups has been reconnecting neighbors who lost some of their sense of community after the 2011 flood. The cleanups, Simpson shared, “Helped heal that wound a little bit and got people out of their homes and working side by side with their neighbors again.” Volunteers take pride in the trash they cleaned up from the banks of the river. Photo Credit: Nancy Simpson / City of Minot

The river cleanups set the stage to make Minot a true river city in the minds of the community members. To further that end, the city is working together with the Friends of the Souris River organization and local businesses and community members to take greater measures to reduce flooding risk, including engineering flood control structures and reintegrating some of the oxbows back into the flow of the river. The long-term plan includes a waterfront greenway and walking path, riverfront gathering places, and a launch for kayaks and canoes.

From the start, the Souris River project in Minot has been a shining example of what happens when city government works hand-in-hand with concerned citizens to make lasting change for their community. While flood protection is the city’s first priority, as Josh Wolsky, a Minot native and active member of the Friends of the Souris River organization, explained, “with a little forward thinking and a little planning and logistic, we might be able to accomplish a whole lot more than that.”

The Cities of Service Resilience AmeriCorps members provided a necessary bridge to make the first projects happen and enabled others to develop sustainable relationships to help future projects succeed. There is now a long-term plan to further reduce flooding risk and make the river accessible to all.