Building Resilience in Tulsa, Oklahoma: Transforming an Abandoned Pool into a Garden 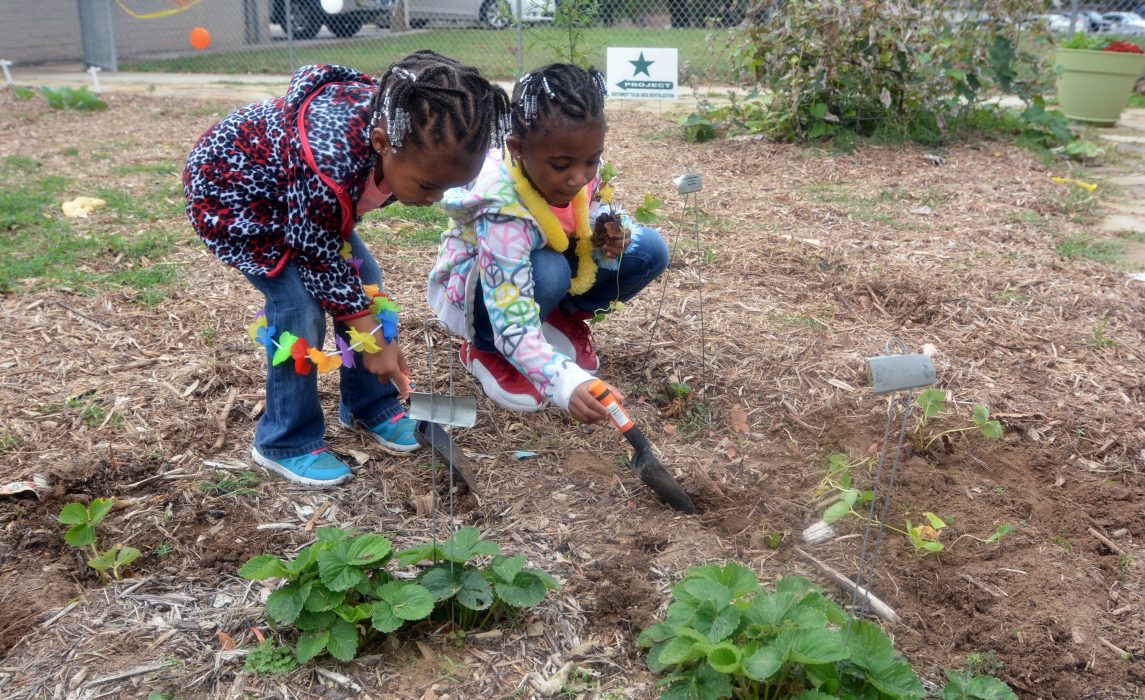 he Challenger 7 park in West Tulsa, Oklahoma, is a bustling, centrally located community hub. The park features spacious sports fields, tennis courts, and other recreational areas for Tulsans to enjoy with their friends and neighbors. Challenger 7 is also home to an old, abandoned pool that was converted into a community garden in 2013.

Initially, Tulsans were involved with the project. Transforming a blighted, 20-by-40-foot pool into a garden was an innovative concept, and volunteers were excited. People showed up to help as much as they could. But there was no consistent organization to the volunteering, and there was no long-term plan for citizen involvement. Over time, people lost interest, and the garden fell into a state of disarray.

Although underutilized, the garden had the potential to serve an important role in Tulsa. The Challenger 7 park is located in a “food desert,” which means that there are no grocery stores within walking distance. In food deserts, which frequently exist in lower-income neighborhoods, people without regular access to transportation can face serious barriers to obtaining fresh produce. Community gardens can improve a neighborhood’s food security by empowering citizens to grow their own fresh, healthy food closer to home.

When Cities of Service Resilience AmeriCorps member Grace Martin arrived in Tulsa, she wanted to help revitalize the garden to alleviate neighborhood food insecurity. Martin was introduced to Kathy Chenoweth, a volunteer gardener who had deep connections to the West Tulsan community.

Unfortunately, the initial citizen enthusiasm wasn’t enough to keep the garden maintained. Even the most creative community gardens need organization and commitment to flourish. With consulting assistance from Cities of Service, Martin and Chenoweth strategized new ways to bolster lasting citizen engagement with the garden.

“Community gardens have a problem with long-term maintenance,” said Martin. At the suggestion of Cities of Service, they decided to recruit a core group of volunteers responsible for the majority of day-to-day watering, weeding, and harvesting of the garden. Together, they reached out to the community with phone calls and emails gauging gardening interest.

Martin publicized the volunteer positions by developing social media posts and handouts to inform potential recruits and other interested citizens about garden duties. Once they had their respondents, Martin developed a volunteering schedule to ensure long-term sustainability of the Challenger 7 garden. The newly recruited core volunteers jump-started the revitalization process by physically tending the garden as well as becoming involved with the community. “The core volunteers actually spark more interest in the garden,” Chenoweth said. “Children and families will see people working in the garden, and they’ll come out and ask about the project.” As the volunteers advocated for the program and networked with neighbors, they got the word out about the program, exponentially expanding community knowledge of the garden.

“Children and families will see people working in the garden, and they’ll come out and ask about the project.”
— Grace Martin, Resilience AmeriCorps Member

The core volunteers were the primary stewards of the garden, but all citizens were welcomed to participate in and reap the benefits of the Challenger 7 garden. After getting the core team together, Cities of Service advised Martin and Chenoweth on strategies to involve the broader Tulsan population. According to Martin, the team wanted to “raise leaders who know how to garden,” so they targeted local schools for engagement. They reached out to coaches at the local Webster High School and organized community service days for athletic teams. According to Martin, “the coaches and teams were so excited for an opportunity to give back,” and the team workdays will continue in the future. These inclusive workdays, along with the daily support of the core volunteers, will allow the garden to continue flourishing. Citizens Use Garden to Learn and Grow

Martin and Chenoweth are also planning hands-on classes to teach students at nearby Park Ridge Elementary School about resilience and food security. According to Martin, “these classes will help build visibility for the garden, provide learning opportunities for people in the West Tulsa area around the garden, and foster a more cohesive community.” Outside of academia, the team is planning contests with cash prizes and promotional events to encourage broader community involvement in Challenger 7.

“We can get people to buy in by asking what they want to grow and what they want to eat. We want to be inclusive, and show that we care about everyone’s opinions and ideas. It should belong to the people.”
— Kathy Chenoweth, Volunteer Gardener

This year, Chenoweth said that the Challenger 7 garden produced “okra and tomatoes, herbs like basil and cilantro, squash, strawberries, asparagus, broccoli, cabbage, radishes, and carrots,” and the team plans to further expand the garden’s offerings. “We can get people to buy in by asking what they want to grow and what they want to eat,” Chenoweth said. “We want to be inclusive, and show that we care about everyone’s opinions and ideas,” said Martin. “It should belong to the people.”

Thanks to the thoughtful team leading Challenger 7 and the support of Cities of Service, the garden serves many purposes in Tulsa. It has replaced blight with an inclusive community space. It’s become a teaching tool for young people. It’s brought fresh produce to a food desert. Citizens in the community have been empowered to take control of their food security and their health, creating a more resilient and secure West Tulsa.