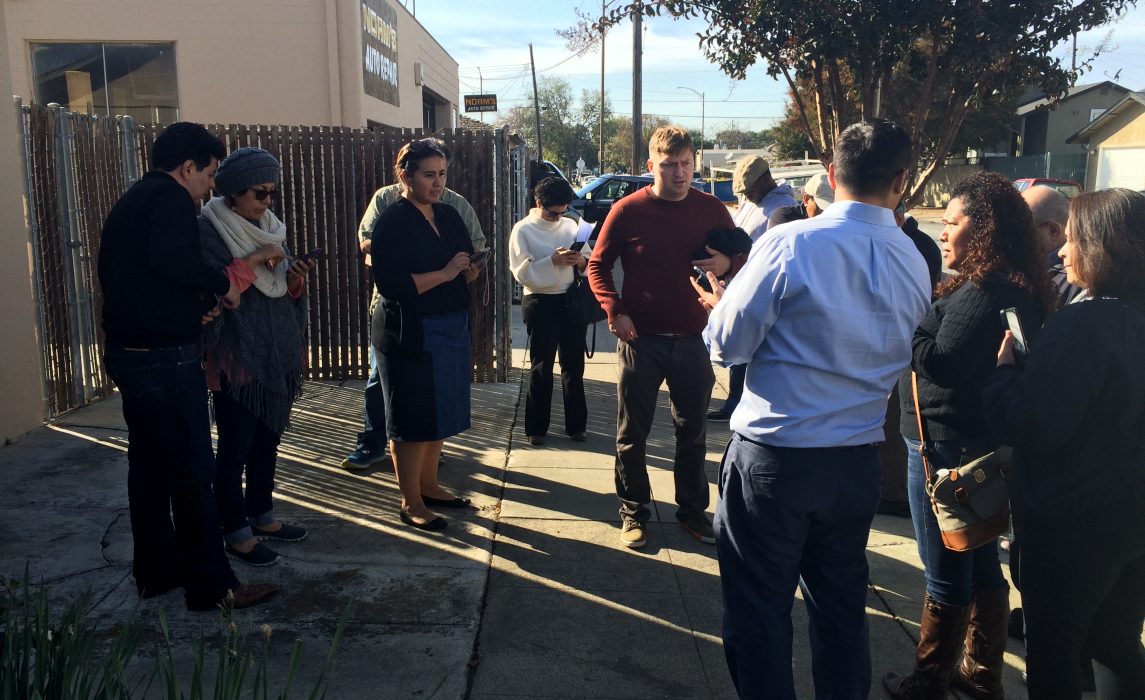 As the capital of Silicon Valley, the City of San José knows that technology is key to solving public problems. They also know that without people, those solutions can only go so far. On December 2, representatives from six nonprofits, all serving different communities throughout San José, joined forces with the city and Cities of Service in a unique effort – to test a new community address mapping methodology and text messaging tool that will help the city prepare for the 2020 Census.

The census determines the allocation of more than $400 billion in federal funding for local programs addressing transportation, education, housing, and small business development. In order for people to be counted, they first need to receive a census form. This can be problematic for many cities like San José, where the rising cost of living has caused many residents to move into low-visibility dwellings, such as converted garages or RVs, which could be missing from the Census Bureau’s address list.  Left uncounted, the City of San José could lose up to $2,000 per person in federal funding necessary to support community programs.

Although the nonprofits each have different missions, they all recognize that fair allocation of funding, which only comes from an accurate census, is a critical issue in their communities.  They know the difficult choices their constituents make in order to afford living in San José, and that sometimes one of the only ways to make it work is living in a low-visibility dwelling. “This is our busiest time of year, but we knew we had to help,” said Terri West, Outreach Manager at Sacred Heart Community Service.

In addition to financial support for the community address mapping pilot, Cities of Service is helping to coordinate the partners and learning from the process so that community mapping can be replicated in other cities. The initiative blends citizen volunteers and text messaging to quickly record the location of low-visibility dwellings in a single list that will only be shared with city officials assigned to work on the census. When a volunteer sees a low-visibility dwelling, they send a text to a designated phone number. The number texts the user back with a series of questions to describe the dwelling: Does it have its own entrance? Is it a garage, an apartment, a trailer, or something else? Where is it in relation to the primary dwelling? The user then texts the location of the dwelling using their smart phone’s location services.  In preparation for the pilot, city officials consulted city council representatives and their staff to select 31 census block groups across 17 tracts that are known to have high density housing and high concentrations of unconventional or low-visibility housing.

The nonprofit representatives gathered at City Hall on Friday morning to prepare for the community address mapping initiative. The next morning, they would train their volunteers and send them out to the designated areas across the city, testing both the technology and the community address mapping process. After a technical training by Dr. Jacob Model of Community Connect Labs, the organization that developed the text messaging tool, they practiced with real examples in the field. Khanh Russo, Director of the Office of Strategic Partnerships and Innovation for San José, explained that the city would gather information about the experiences of the volunteers and the data yielded during the pilot to improve the initiative for a larger rollout in the spring. Despite some uncertainty, Russo knew they were starting with a strong foundation. “We have been meeting with this group throughout the development process and are confident we will learn a lot from the first run.”

Like the nonprofits, the volunteers were excited to work on something out of the ordinary. When students from Bellarmine College Preparatory arrived at Sacred Heart for their community service hours, they didn’t realize they would be helping the city while getting an intimate look at the very neighborhood they serve on Saturday mornings. “Walking around today gave me a whole new perspective,” said one student.

In teams of four, the students walked five miles along the streets that crisscross the Washington-Alma neighborhood. As a group, they discussed any low-visibility dwellings they spotted, and then took turns recording the dwelling with the text messaging tool. As they got more comfortable, the team split up into pairs to cover opposite sides of the street. They were surprised at what they saw, including a make-shift mobile home park and a building that appeared to have eight unmarked units. The students remarked on the sacrifices that families are making to live in San José as housing prices continue to rise.

After canvassing, the students gathered back at Sacred Heart to discuss the process with Darren Seaton, Deputy Director of Sacred Heart and Nick Almeida, Chief Service Officer for San José. The students offered helpful advice about how to improve the technology and simplify the process for the spring when San José expands the program for a citywide effort.

The nonprofits continued to send volunteers into the community the following week until every block of the designated areas had been canvassed. Although it will take some time to analyze the data from the community address mapping pilot and consider improvements to the process, there is reason to be confident for a successful rollout in the spring. “One thing that’s for sure is that everyone is really bought in,” said Model.

The volunteers appreciated being involved in a new initiative, and they believe the community address mapping initiative will make a difference for San José. “It will mean that more people will be able to fill out the forms, generate more accurate statistics, and make sure everyone gets the amount of federal dollars that they need,” one student remarked. By participating in the pilot, the students offered a service both to their city and the community, getting a more holistic view of the communities they serve and the innovative strategies the city can use to make sure everyone one of their neighbors is counted.