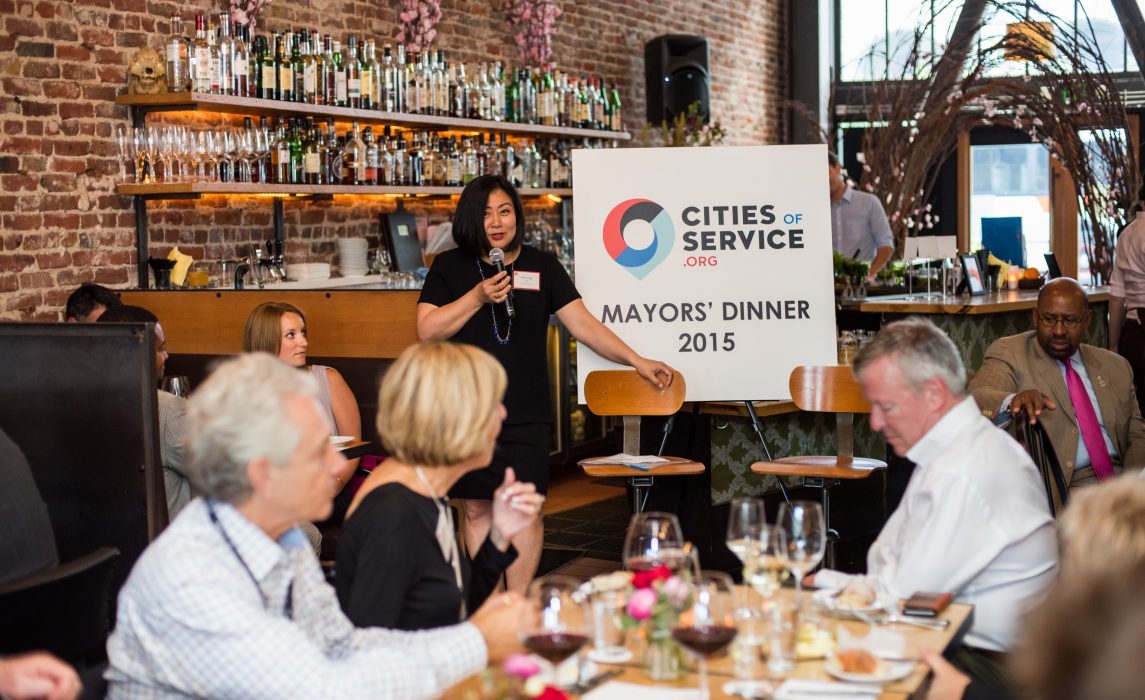 yung J. Lee is Cities of Service’s Executive Director and resident foodie. After graduating from Georgetown Law School, Myung spent several years at the Corporation for National Service, first as a program officer for AmeriCorps and then in the General Counsel’s office. After this early exposure to service, Myung held a series of jobs in government, nonprofit, and corporate sectors, most recently as a Deputy Commissioner in the New York City Administration for Children’s Services Division of Early Care and Education. Today, Myung has found herself back in the world of service with Cities of Service.

Myung: When I was about to graduate from law school, I had a job offer from a major, corporate law firm and life was going to be good. But then, I had a bit of a “life/career crisis” and decided that working at a law firm wasn’t going to help me change the world. So, I applied for a Women’s Law and Public Policy Fellowship. They placed me at the National Women’s Law Center and I worked for an amazing woman, Brenda Smith, who was working with incarcerated women in Washington, D.C. I spent two years doing work at Lorton Reformatory, an incarceration facility in Virginia. We created a clinic where we worked with the women in the prison to teach them the law and their rights. While at the National Women’s Law Center, I met Shirley Sagawa (now of Sagawa/Jospin). She eventually left the National Women’s Law Center and went over to the Corporation on National and Community Service as the Executive Director. (The CEO, at the time, was Eli Siegel; a great man.)

A few months after my Fellowship ended – I had turned down the corporate law firm job in New York and was working at a small firm in D.C., giving tax advice to and doing contracts work for nonprofit organizations – I got a phone call out of nowhere from a woman who said “Shirley would like you to come in and talk to some people here.” The job was not to be a lawyer but a program officer for this new program, AmeriCorps. That’s how my career in “service” began – as a public servant working on building the national service movement. It was the best job ever. I love the idea of infusing service into everybody’s lives and making sure that there is a way to give back to your community.

Work With Cities of Service

I am still trying to figure out what I want to do when I grow up, but this job comes the closest to what I want to be doing.  I have worked in federal government, in city government, in lots of nonprofits, and in the private sector. I don’t believe that “grassroots” is the best way to affect change – nor do I believe that top-down leadership exclusively is the answer. I think that you need to have a combination. You need to keep yourself in check by having the people there and you also need to keep yourself in check by having the leader there. It is a matter of people coming together and figuring things out. Having been on the inside (of government) and the outside, I think government as we experience it now is broken in so many ways, and I believe that Cities of Service can work with our city leaders to help fix it.

What I love so far about going to the cities and meeting the mayors is how much they really care about their cities and are working to do the right thing. And, I love how they embody the spirit of their cities and have fun with it. For example, I loved meeting Carolyn Goodman, the Mayor of Las Vegas— she has a poker chip as her business card! C’mon – how fun is that? Part of the job that I also love is that the people we work with at the cities are the “solution people,” and they are happy. They are excited about what they do, they are interested in the people they are working for and with, and they really care about and are proud of their cities! That gives me such hope for our cities and their people. This job, to me, is all about possibilities and great results. I really like that.

For more of Myung and her work with Cities of Service, follow @myunglee.