Powered by Partnerships: Inside the Cities of Phoenix and Mesa, Arizona 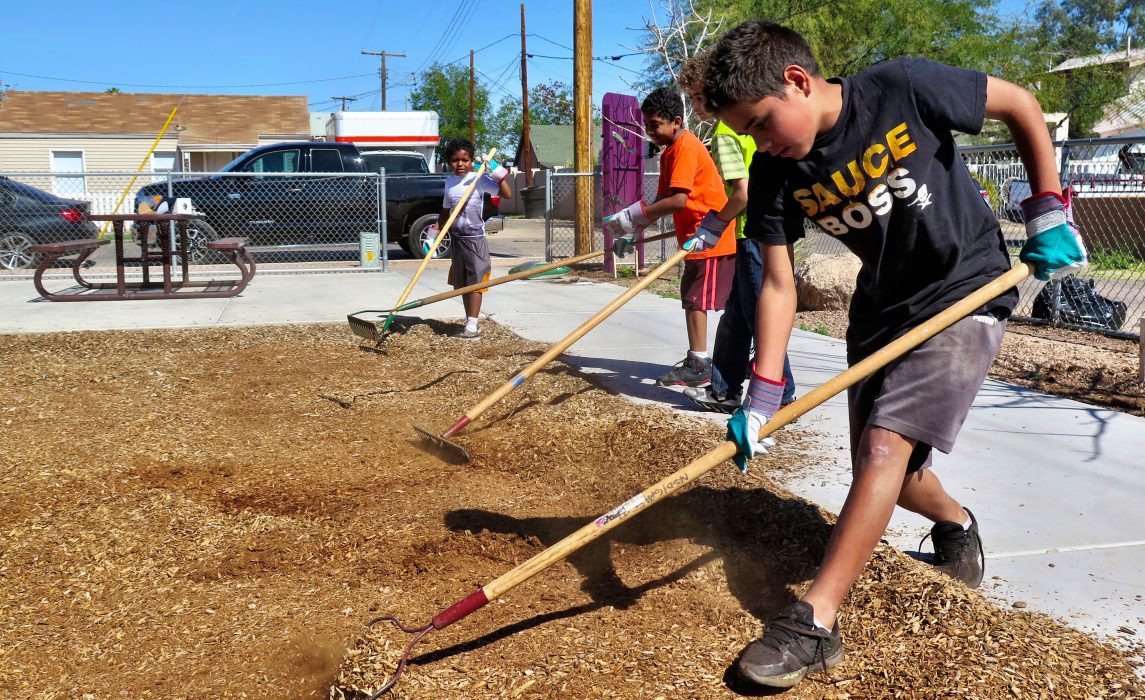 ast week, the Cities of Service team conducted a site visit to the cities of Phoenix and Mesa, Arizona. We had the privilege of meeting with Mayor Greg Stanton of Phoenix and Mayor John Giles of Mesa, as well as several city leaders, principals of partner organizations, and many dedicated residents who are passionate about citizen engagement and service in their communities. See pictures from our trip.

Phoenix and Mesa have been long-term partners of Cities of Service and have implemented a range of initiatives to strengthen neighborhoods and mitigate rising temperatures and air pollution using Cities of Service blueprints: Let’s Grow, Love Your Block, and Cool Roofs. After three days in the Southwest, I was humbled by the commitment these cities have made to service, impact volunteering, and civic relationships more broadly. We saw this commitment in many different ways, but the common thread was clear: these cities are led by leaders who believe in their citizens and are powered by thoughtful and effective partnerships. We witnessed the positive change that impact volunteering can bring through citizen engagement, and the result is an omnipresent “small town in a big city” feel that is quite impressive in cities with 500,000 (Mesa) and 1.5M (Phoenix) residents.

Throughout our time there, we met with several city leaders who shared their stories of using service as a tool for civic engagement. Phoenix City Manager Ed Zuercher described how transparency, accountability, and availability lead to better partnerships among city departments, nonprofits, and residents. Mayor Greg Stanton shared how the city partnered with organizations like PHX Renews and Keep Phoenix Beautiful to transform a privately-owned 15-acre vacant lot in the middle of the city into a place where city residents grow produce to eat or sell at farmers’ markets. The city provides the water via connections to the canal system, and Keep Phoenix Beautiful and PHX Renews help manage the more than 150 community volunteers who work on the land, including several plots that are maintained by the International Rescue Committee and refugee volunteers.

Also in Phoenix, Chief Sustainability Officer Mark Hartman and Homeland Defense and Emergency Management Director Kevin Kalkbrenner explained how the new Resilience AmeriCorps members are already strong partners for their teams. They look forward to all that the AmeriCorps members will do to engage the community on everything from community gardening and shade management to evaluating the current emergency response plans. We also volunteered alongside the residents of the Triangle Neighborhood, where a newly formed homeowners association recently received a Love Your Block grant to clean up a park and its adjacent alley. Residents old and new came out to volunteer, to meet their neighbors, and to give some love to a community park that will become a gathering place for the neighborhood.

Mayor John Giles of Mesa shared how volunteerism and service are important to his city, especially with the strong faith-based community present throughout Mesa. In particular, we were so impressed by the city-operated Paint Reuse and Tool Lending Programs, which help the city’s residents access the materials they need to conduct their Love Your Block efforts. Mesa is a former Cities of Service Love Your Block grantee – the Paint Reuse and Tool Lending Programs can serve as models for other cities in our coalition, and they’re great examples of how a city is working to prevent blight and engage its citizens after the grant term from Cities of Service has ended.

As members of the Cities of Service coalition, both Phoenix and Mesa are staffed with specific champions of service who work to integrate volunteerism and civic engagement strategies into the everyday workings of City Hall. Michael Hammett, in Phoenix, and Michelle Alvis, in Mesa, lead the charge with their mayors, city executives, nonprofit partners like Keep Phoenix Beautiful and HandsOn Greater Phoenix, and AmeriCorps VISTAs to bring citizen engagement and impact volunteering into the conversation whenever possible. We are so proud to have these cities as members of our coalition. Everything that we witnessed in Phoenix and Mesa is proof that, when the right partners are brought to the table and deliberate and collaborate on initiatives together, they build lasting relationships for stronger cities. See pictures from our trip.