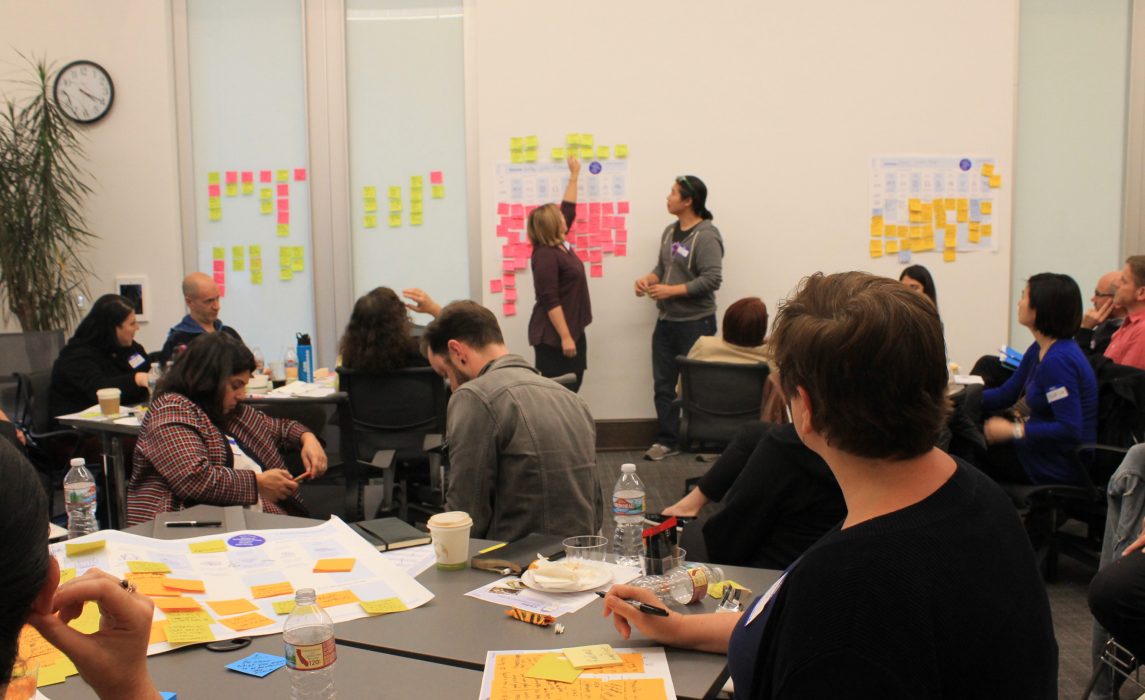 In 2015, San Francisco created the Civic Bridge program to draw on the talents and expertise of the city’s residents to help address critical civic challenges. Once a year, a cohort of private-sector volunteers from companies like Google and Adobe spend 16 weeks working with city departments to address issues, including access to affordable housing and health coverage.

Private-sector volunteers have worked on nearly 50 projects over 24,000 volunteer hours, providing an estimated $3.9 million in pro bono services. In the summer of 2019, the city decided to engage more partners with a new model: a Day of Service.

The Civic Bridge project management team recruited ten pro bono partners to come in for a day, examine problems, and design solutions. They worked with various city departments to scope challenges that could be addressed in a single day, such as improving an opioid addiction program website and assessing a pilot program that uses school facilities as emergency family shelters. They then matched each project with a pro bono partner.

“The Civic Bridge Day of Service gave us a new structure and process to work with community members and ask the right questions.”

One of the partners was HOK Architects. Volunteers from the firm helped map safety issues in the Tenderloin neighborhood and recommended improvements that would make the public spaces safer and more welcoming.

Nathanial Haynes, Senior Interior Project Designer for HOK, was excited to address some of the issues he had encountered himself as a San Francisco resident. “This was an opportunity to understand the problem a little more deeply and make an impact,” said Haynes, who has lived in the city for 15 years.

For Haynes and his team, the day began with a discussion, led by the staff from San Francisco’s Office of Economic and Workforce Development about social services and public spaces in the Tenderloin. Neighborhood residents and representatives of nonprofits that serve the area were also there to add their perspective.

“I never understood that the majority of people hanging out on the street live in a building right nearby,” said Haynes. “We haven’t necessarily done a good job of providing outdoor spaces for people who live in single room occupancy housing.”

The rest of the day was dedicated to brainstorming and designing interventions that could improve public spaces in the neighborhood. The team decided on several projects to implement, including adding a mural in front of an empty lot, along with new planters and greenery.

“There are community spaces that need to be designed so people have a space to be,” said Haynes. “Hopefully, by providing those spaces, we can start to remove the stigma that comes along with people hanging out on a sidewalk.”

While the city works on implementing these changes, the Day of Service has already had an impact.

“The Day of Service is changing the way our office awards grants,” said Darcy Bender, Project Manager for the Office of Economic & Workforce Development, who saw the benefits of bringing multiple voices to the table. “We now award façade improvement grants based on block safety group recommendations and have 12 people standing behind it with a collective voice of support versus a single property owner.”

“There are community spaces that need to be designed so people have a space to be.”

Through both the Day of Service and the 16-week program, Civic Bridge is providing new insights and introducing user-centered design to city departments, and changing the way they approach problems.

“The Civic Bridge Day of Service gave us a new structure and process to work with community members and ask the right questions,” said Bender. “It is enabling people to step into leadership positions in a concrete way that wasn’t possible before.”