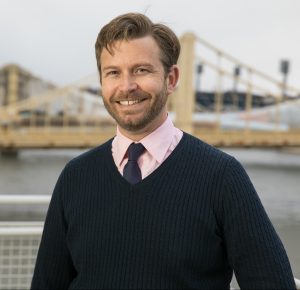 Brooks Rainwater is director of the National League of Cities’ Center for City Solutions and a member of the Engaged Cities Award review committee. As part of an ongoing series, we asked him a few questions about the award and his own work.

The Engaged Cities Award recognition is important because it is a clear signal to cities—and, most importantly, community members—that local leadership is important for solving problems in inclusive and innovative ways. It is in cities where we see policy landscapes that are action-oriented and focused on results. Unlike other levels of government, city leaders don’t vacillate and equivocate. They do the work on behalf of the people that elected them to do it—and they create replicable solutions for other cities that the Engaged Cities Award can help elevate.

It is in cities where we see policy landscapes that are action-oriented and focused on results.

One of the results we have seen in our work with cities is that those who successfully engage their citizens to solve problems also build trust with their citizenry. Why do you think mayors and city leaders are especially equipped to build these relationships?

Mayors and city leaders spend their days in the communities that they represent and are often lifelong or long-term residents of the places they govern. They know community needs because they have heard directly from the people that are experiencing them. This direct connection with people, whether in a grocery store or a community meeting, grounds local governance in community engagement. Ultimately, local leaders are equipped to build relationships with the people in their communities because they want what is best for their city and they work hand in hand with community members to make that happen.

You work a lot with city leaders to help them create stronger cities. Why do you think mayors and city leaders are well positioned to identify and address problems with citizens?

Mayors and city leaders fundamentally want what is best for their cities. They wake up every day ready to get to work for the public, whether that means making sure the potholes are filled or homeless residents have a place to sleep at night. The type of individual that seeks to become a local leader thrives on engaging with residents and ultimately wants to create communities that balance the needs of residents today with plans for a tomorrow that is built by and for all.

[Mayors] wake up every day ready to get to work for the public, whether that means making sure the potholes are filled or homeless residents have a place to sleep at night.

What are you working on now at National League of Cities’ Center for City Solutions that would be interesting to people who care about helping citizens and cities collaborate to solve public problems?

We are working hard everyday at NLC’s Center for City Solutions to help provide the tools and resources that city leaders need to succeed. We have an amazing team of more than two dozen city experts that are hard at work doing research on city issues, spending time on the ground delivering direct technical assistance to cities, and educating and coaching city leaders in the skills they need to run their cities better. In 2019, the core issues that NLC is focusing on are affordable housing and infrastructure investment. For America to succeed and compete, we need infrastructure for the future and the investments that can make that happen. Meanwhile, housing affordability has become an increasingly acute problem in cities nationwide, so we have convened a national task force, chaired by Washington, D.C., Mayor Muriel Bowser, to champion solutions at the local and federal level. As part of this, we are developing robust research on housing that will drive our priorities well into the future.