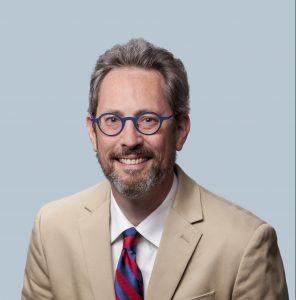 Matt Leigninger, Vice President of Public Engagement & Director of the Yankelovich Center at Public Agenda, has extensive experience in the area of citizen engagement. He is serving on the Engaged Cities Award review committee for the second year. As part of an ongoing series, we asked him a few questions about the award and his own work.

The recognition is important partly because of the state of democracy in the world. More than ever we need good and different examples of ways to effectively engage citizens. For most people, the most effective and meaningful engagement will be at the local level. It is cities who are leading the way–and have to lead the way–creating systems that people will like and that will be productive.

What did you find interesting about the applications you read last year when you served on the 2018 review committee?

It is fascinating to see the different, creative ways that cities all over the world are engaging citizens. One real value of an awards program like this is that it enables people to see that they have a range of options – they can incorporate service, technology, deliberation, food, and other elements, all of which are complementary, as part of their systems for engagement. You can add new elements based on what you see in other places.

The more people know each other, the better they are able to respond and help each other when something like Superstorm Sandy hits.

What made you want to serve as a reviewer for the award again?

It’s really inspiring to me to be able to read some of the stories of what people have done in different cities, the challenges they were up against, and the creativity they showed in responding to those challenges. They’ve adapted some universal principles about citizenship in different settings with different cultures and different assets.

The example of Santiago de Cali, which was one of the three winners last year, was particularly inspiring. There was violence taking place at the neighborhood level for several reasons. Yet, city officials created this very extensive infrastructure at the neighborhood level all the way up to the city level, to engage people in ways that reduced violence and had all kinds of other benefits.

You’ve done a lot of work in the area of citizen engagement. Is there anything you are working on now that you think would be particularly interesting to city staff working with citizens to solve problems?

We’re working on an annual cycle of engagement in New York City that aims to make communities more environmentally and economically resilient in neighborhoods surrounding Jamaica Bay. We’re involving people in a more sustained way to do an annual sequence of participation, which includes games, information, education, mapping, deliberation, and working with public decision-makers and officials. Part of that strategy includes fun activities that create a regular pattern of engagement in those neighborhoods. That’s important because in addition to giving people a voice in policy making, you’re also strengthening social networks, which has its own impacts in terms of the economic viability of the neighborhood and its level of preparedness for natural disasters.

We also have a new paper out called Rewiring Democracy. The focus is on how the next set of technological trends is affecting engagement and democracy. It’s about AI and blockchain and all of the “subconscious technologies” that are either coming down the pike or already here in ways that we don’t realize. The paper examines how those technologies interact with citizens’ desire for conscious engagement, and how those two trends are reshaping democracy.